On the 23rdof February 2015, in the pre-dawn hours, ISIS mercenaries began their criminal campaign in Tal Tamr town, claiming lives, especially in the villages of Khabur, and kidnapping more than 250 Christian civilians in the first hours of their campaign.

The People's Protection Units and Women 's Protection Units (YPG, YPJ), with the support of the Syriac Military Council and the Khabur Guard forces, had another path, which is the resistance and repel the brutal aggression that targeted the city and its residents.

On the 6th anniversary of the liberation of Tal Tamr district and its countryside from ISIS mercenaries, the Syriac Military Council and the Internal Security Forces - the Sootoro, issued separate statements in which they emphasized the continuation of the struggle.

Statement of the Syriac Military Council:

“On February of each year, we commemorated the anniversary of al- Khabur resistance, through which our fighters were able to confront the most dangerous terrorist organizations.

We are determined in confronting extremist terrorist organizations, our resistance that our Syriac military council has written with its heroics that history has inscribed in its most beautiful forms, and we commemorate our first martyr, the martyr (Athro) and his heroes who sacrificed themselves in order to liberate many of our people from the grip of these extremists.

We, in our turn, set out to protect our people and preserve their existence, and we took the initiative to defend ourselves and our people, as we deployed our forces in the areas of Tal Tamer and the Khabur Basin.

We made sacrifices and sought to spread security and peace in our villages and regions against any threat that threatens our existence and denies our identity, and we will defeat it strongly, and we have presented and are still presenting martyr after martyr in order to liberate our land and defeat terrorism from every inch of it.

And our fragrant prayers to our righteous martyrs of mercy and eternity, and we renew to them the vow to continue the struggle until the last breath. " 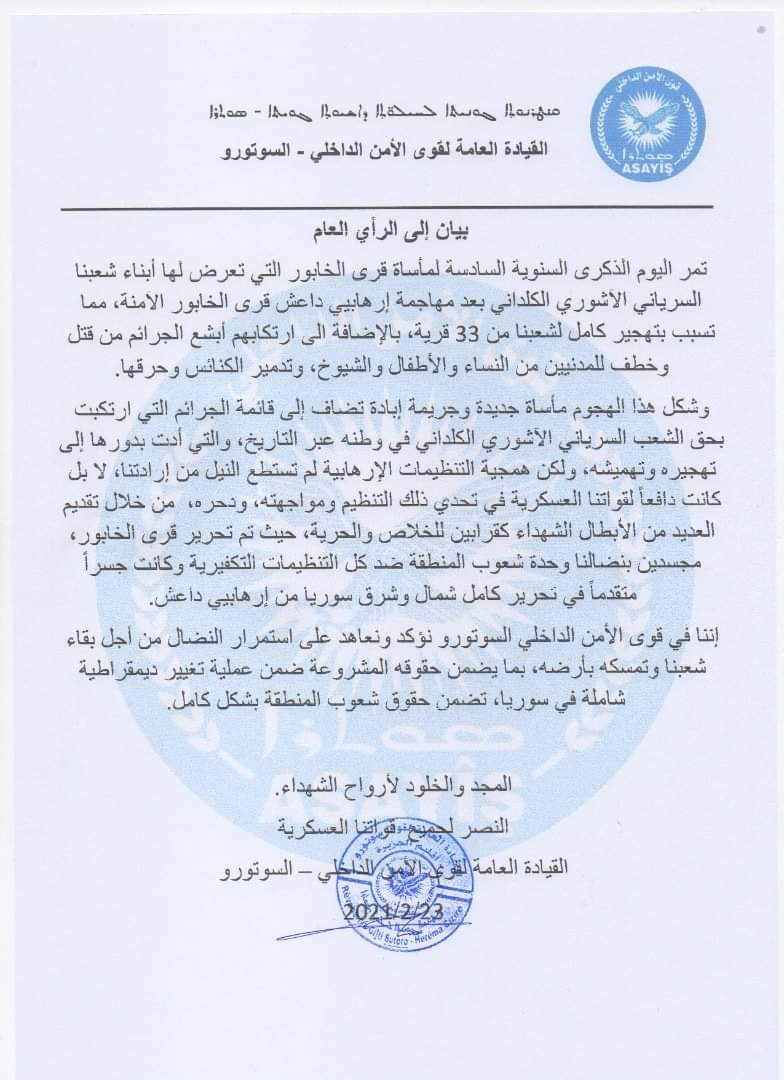 Today passes the sixth anniversary of the tragedy of the villages of al-Khabur that the Syriac-Assyrian-Chaldean people were subjected to after ISIS terrorists attacked the safe villages of al-Khabur, which caused the displacement of our people from 33 villages, in addition to their committing the most heinous crimes of killing and kidnapping civilians, including women, children and the elderly, and destroying and burning churches.

This attack considered a new tragedy and a crime of genocide, to be added to the list of crimes committed against the Assyrian-Chaldean Syriac people in their homeland throughout history, which in turn led to their displacement and marginalization.

However, the barbarism of terrorist organizations could not undermine our will. Rather, it motivated our military forces to challenge, confront and defeat that organization, by sacrificing many martyrs for salvation and freedom, as the villages of al-Khabur were liberated, embodying in our struggle the unity of the peoples of the region against all the takfiri organizations, which was the beginning of the entire liberation of NE, Syria from ISIS/ Daesh terrorists.

We, in the Internal Security Forces - Sootoro, affirm and pledge to continue the struggle for the survival of our people and their adherence to their land, in a way that guarantees their legitimate rights as part of a comprehensive democratic change process in Syria that fully guarantees the rights of the peoples of the region.

The unremitting barbaric shelling by the Turkish Occupation Forces and the affiliated mercen...

Intellectuals and jurists in Afrin region emphasized that the opening of a cultural center i...
Old Website