Hundreds members and administrations of the Council of The Martyrs Families, Foundations, Civil Unions and residents of Ahirs area  gathered in the  district squar, they carried the flags of the Council of  Martyrs Families   and the Syrian Democratic Forces and pictures of the martyrs of the the Age resistance and the leader Abdullah Ocalan, and a banner written on it "in the spirit of the freedom martyrs, we will defeat the conspiracy and make from the life resistance."

The demonstration roamed the streets of the neighborhood to the Shrine of the Martyrs, amid slogans hailing the Age resistance.

When the demonstrators arrived at the shrine square, they stopped a silence minute in honor of  the martyrs' lives, followed by reading a statement by  two members of the Council of The  Martyrs Families in both Zakia Ismail and the Kurdish, avdar Alou.

. In the same context, the Council of  Martyrs Families and War Wounded in Al Sheikh Maqsood neighborhood of Aleppo city in northern Syria read a statement to the public.They called on the United Nations to end the occupation and grant international guarantees for the return of Afrin residents to their homes.

Dozens of martyrs' families and war wounded gathered in front of the Council of Martyrs' Families in the western part of Al Sheikh Maqsood neighborhood of Aleppo, carrying pictures of the martyrs. A statement was read in both Arabic, Arabic bY member of the Council of the Martyrs Families, Awash Jawaish, and Kurdish by The Teacher Suzdel Nebo.

The joint statement in Al-Shehaba and Aleppo read as follow:

Today, two years have passed since the occupation of Afrin canton, as it is known that after Afrin canton was in a state of stability and security, and was a safe haven for the displaced Syrians fleeing from  the conflict zones, the Turkish state used of the following factions On January 20, 2018, the Syrian opposition that is of Islamic terrorist tendencies, launched a full-scale attack on Afrin city  and all its areas, sending more than 70 warplanes flying over the region.

The war had lasted for two months amid the resistance of Afrin civilian people  and the legitimate defense by People  Protection Units of the people and  Women Units, and under the nose of the world, the Turkish  States used advanced warfare techniques and internationally forbidden weapons, and targeted the  civilian populated areas.  Several massacres were committed against them, and the toll of war and massacres was more than 1,500 martyrs and hundreds of those affected by the war, including children, women and the elderly.

On March 18, 2018, nearly 400,000 Afrin residents went out to the areas of Al-Shabha to escape the massacres, where the Turkish army and its factions took full control of the city and its environs. Following its control over the area they started out of laws and the  international conventions,  looting of the citizens' property, and the seizure of the  olives land, which is the only source of livelihood for the people.

The Turkish State was not satisfied with the ongoing aggression, and has become on pursuing Afrini people in their areas of displacement, targeting them with artillery shells, where dozens of displaced people  were killed, the latest of which was a massacre of children living in Tel Rifaat, where 8 children and two elderly people were killed and others injured. And their limbs were amputated in the most brutal way.

Hence, we, as the Council of the Martyrs Families in Afrin canton, remind the public of the seriousness of the current situation in the occupied Afrin and the people at the displacement camps. Based on the above, we, the families of martyrs and the families of those affected by the war, we call on the United Nations Security Council to carry out its humanitarian and human rights obligations and move quickly in accordance with the international conventions and laws, and we call for an end to the occupation. On all the Syrian areas such as Azaz, Al-Bab and Jarabulus, and first of all of,  Afrin.

We go back and confirm that what the Fascist State is doing is intolerable, and Afrin people cannot continue to suffer injustice to this degree under the nose of the world. "The UN's silence on this situation is one of the immediate reasons why the Turkish State continues to expand to other regions, creating a more entrenched situation of the Middle East crisis than it is now, and increasing the likelihood that terrorism will spread to Arab and Western countries in general."

In the end, the participants in the demonstration of Al-Shehaba al-Shamaa on lit candles the shrines of the martyrs. 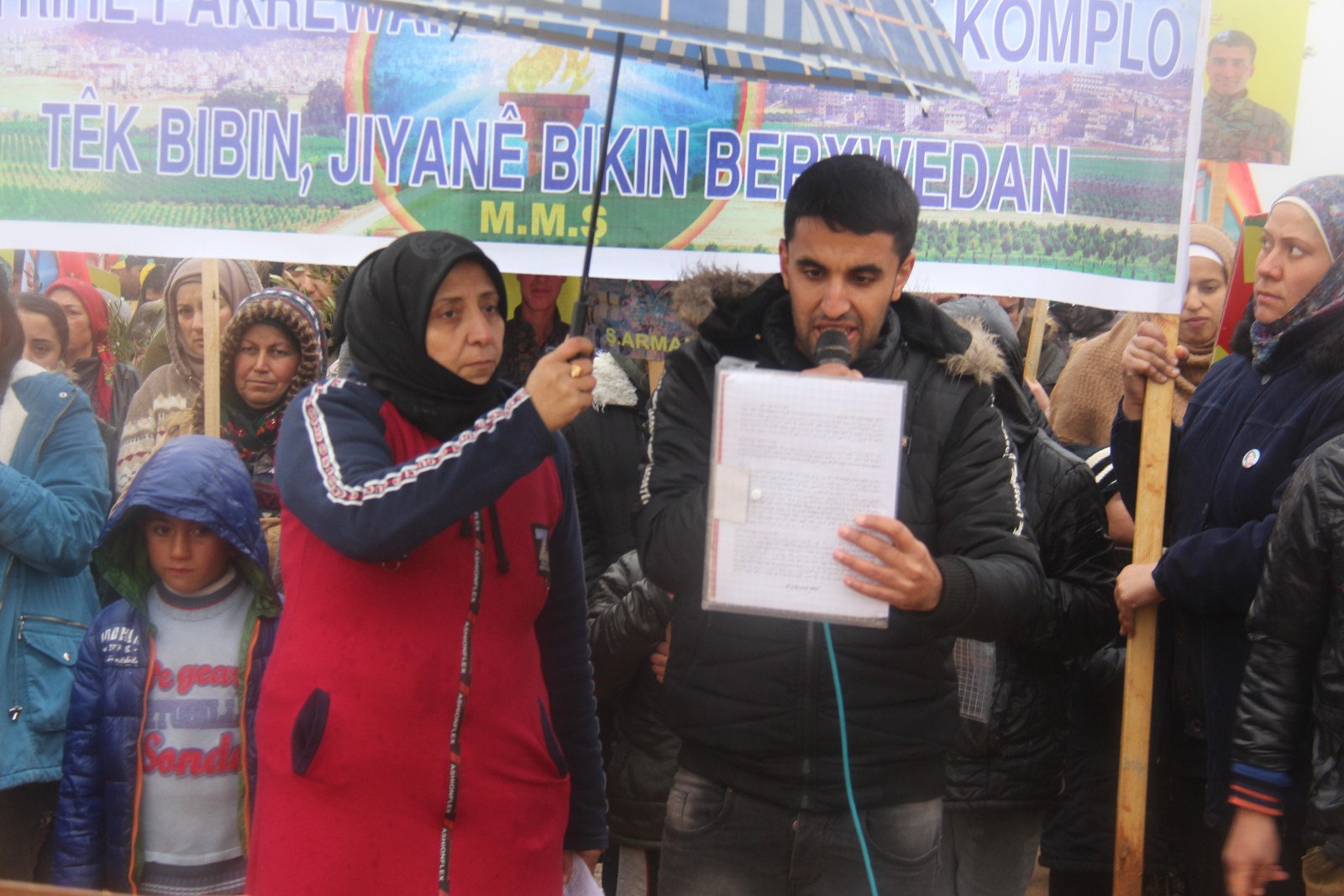 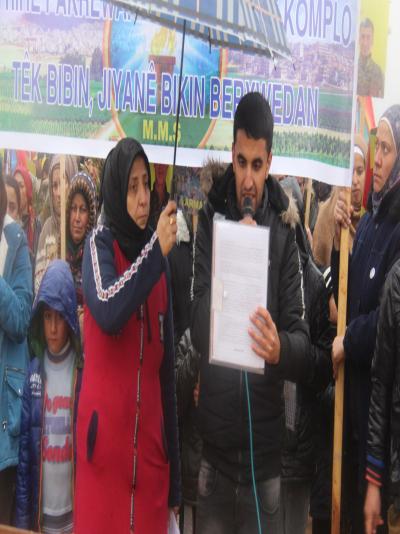 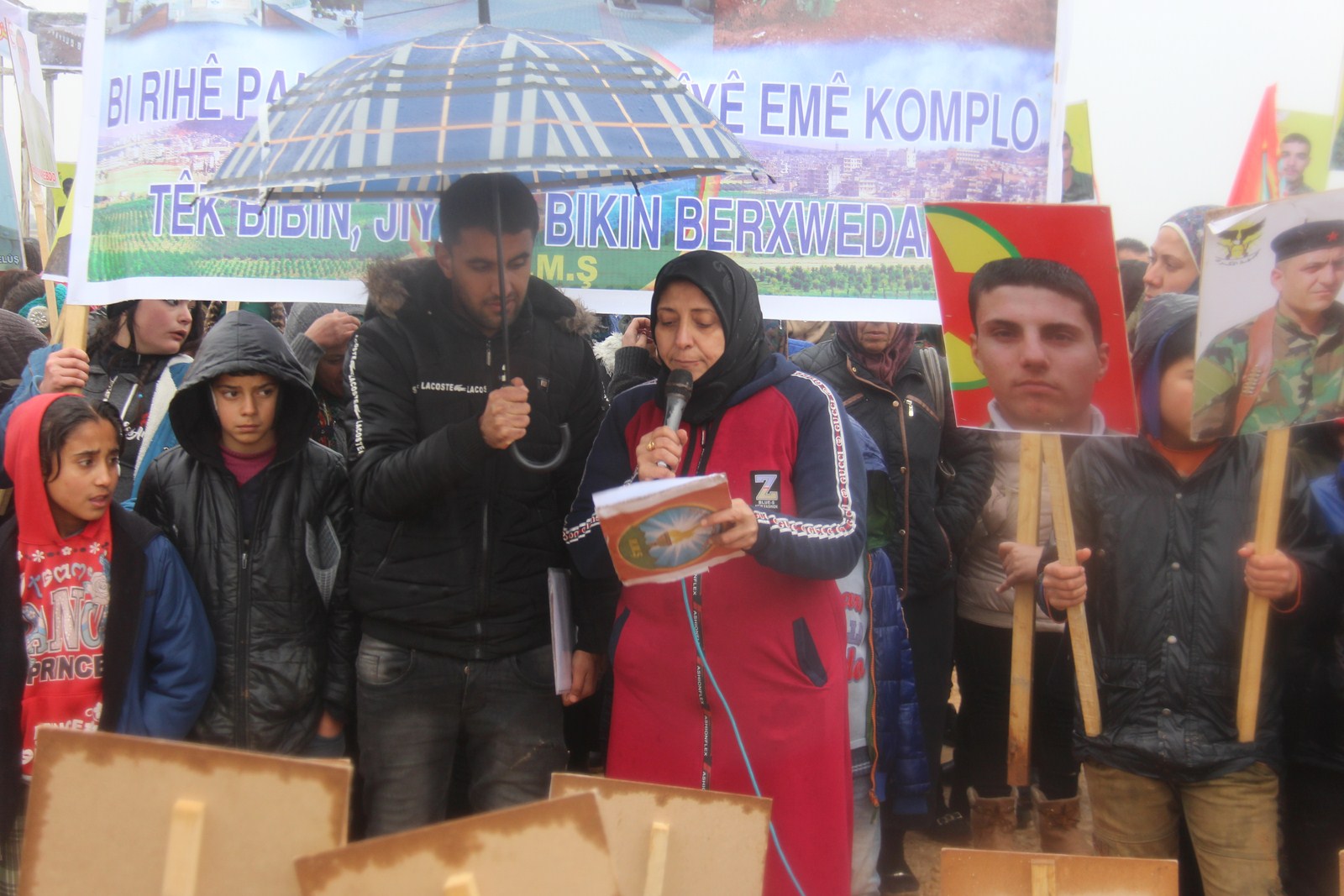 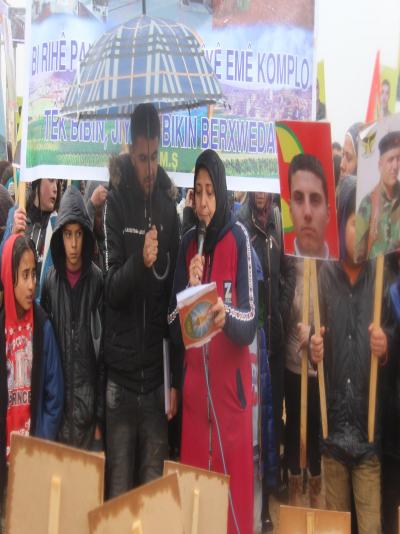 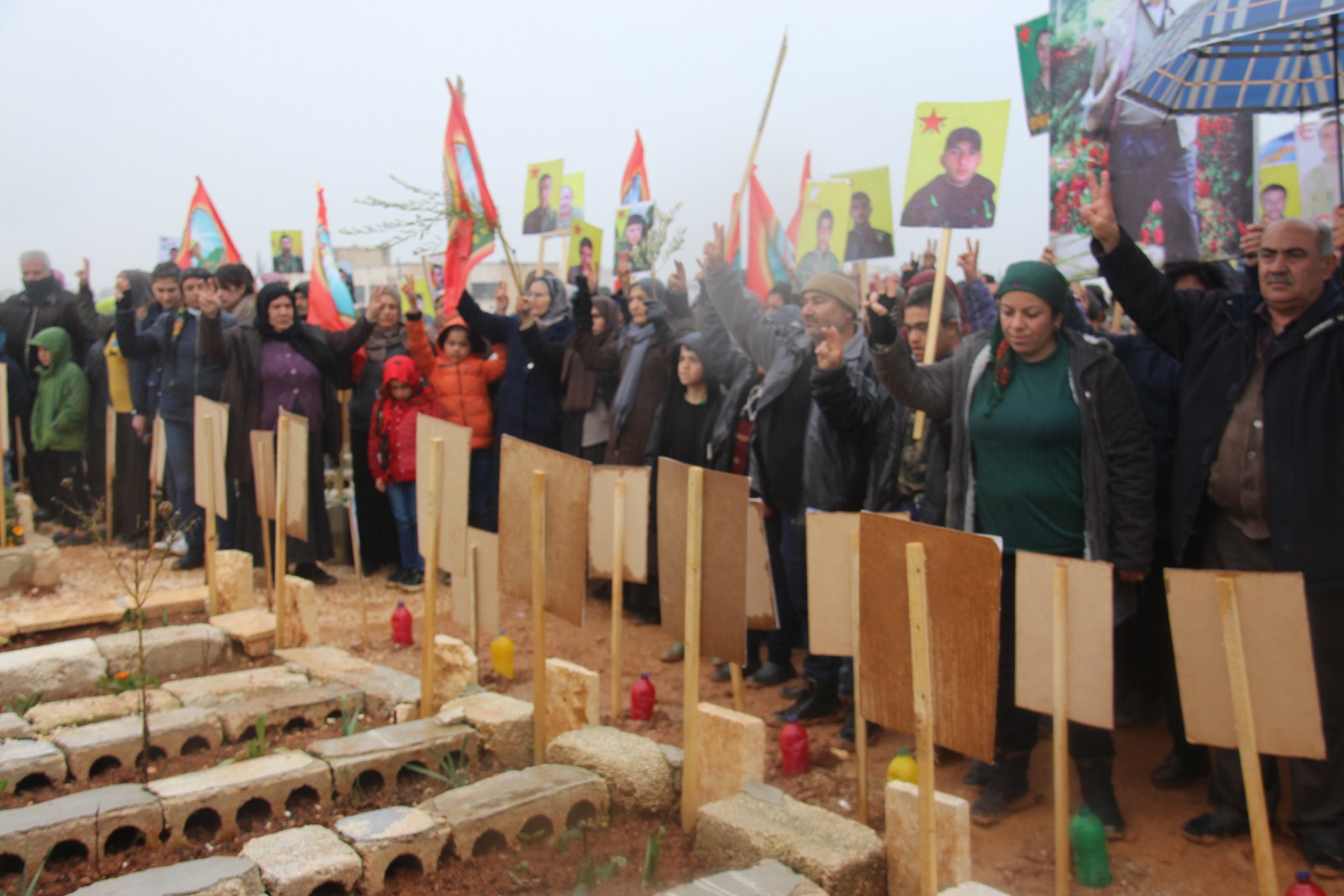 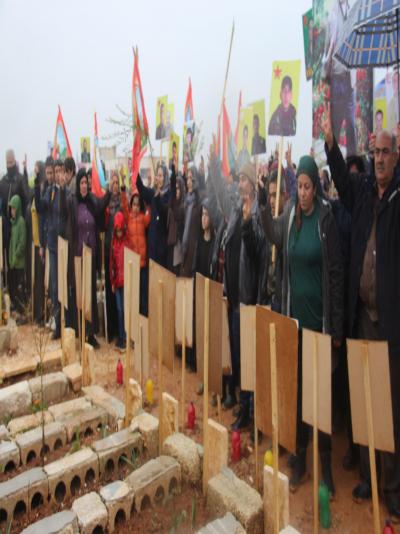 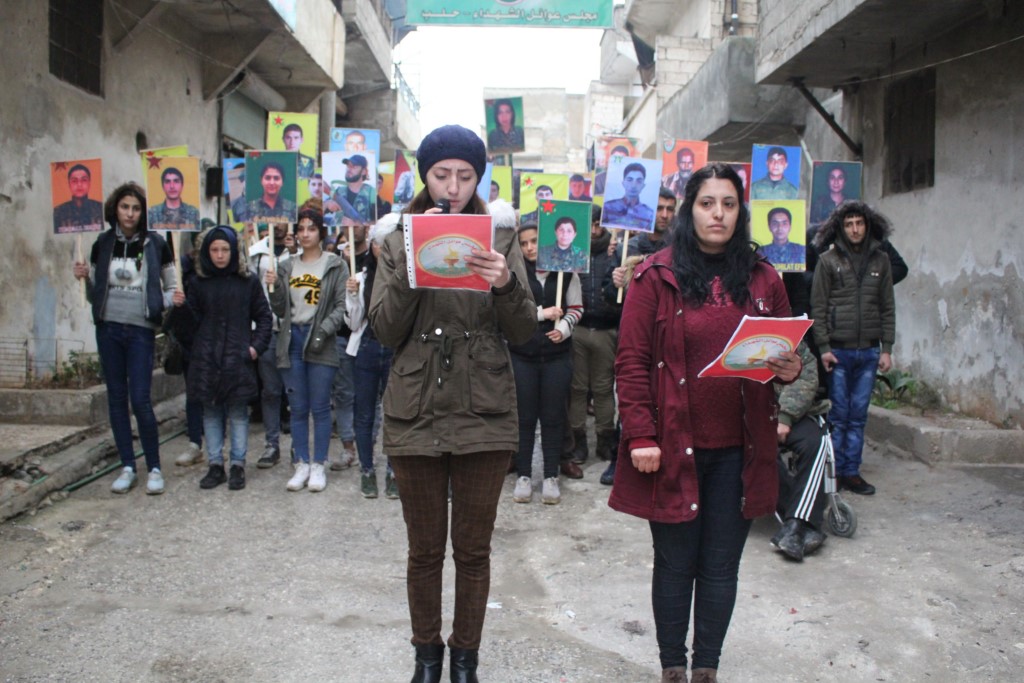 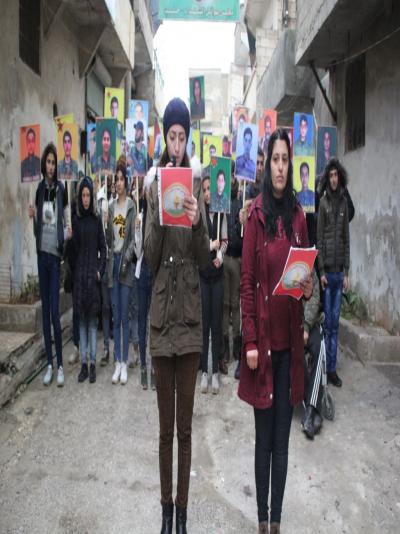 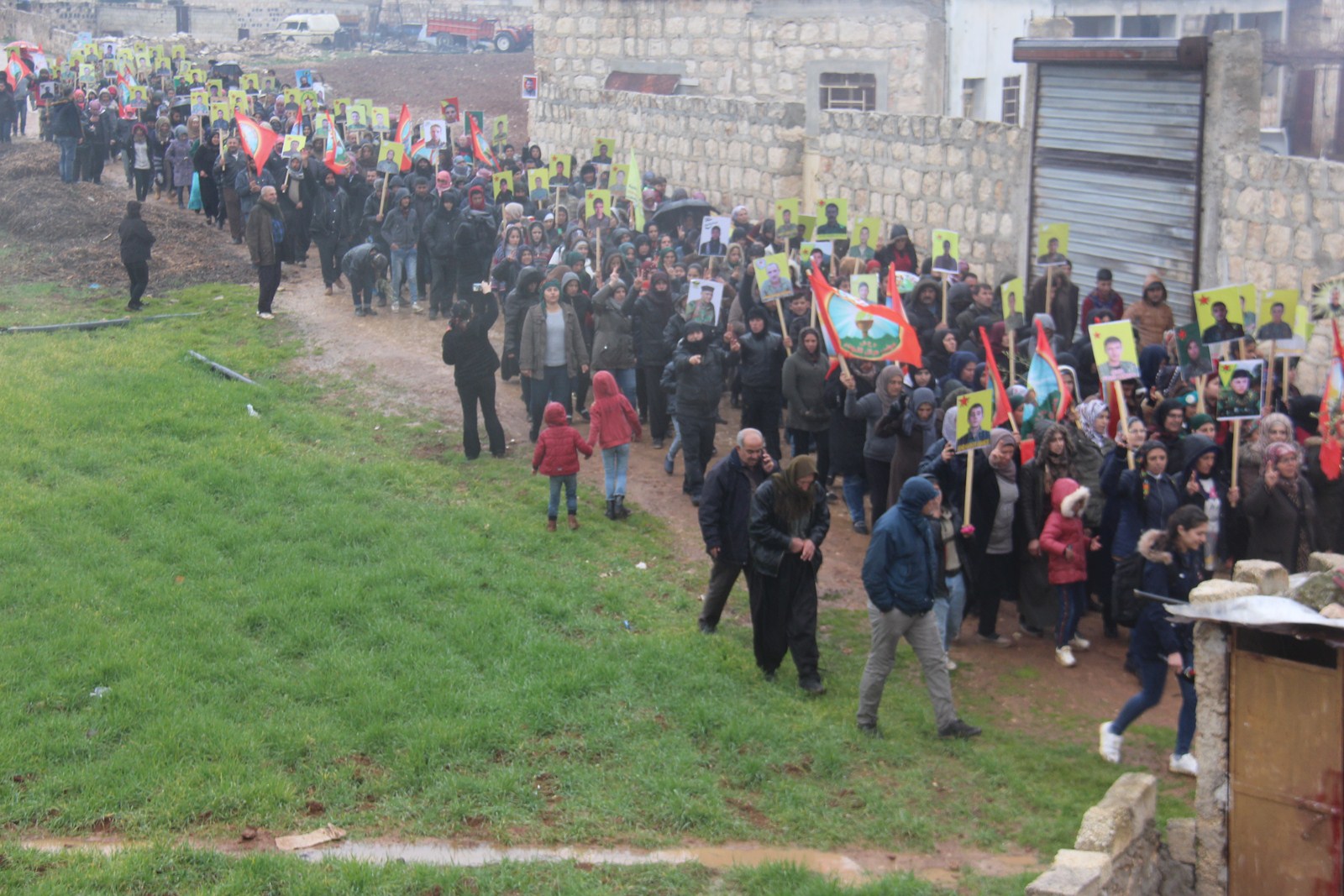 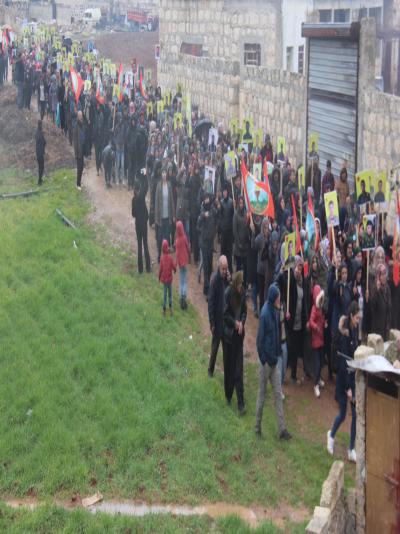 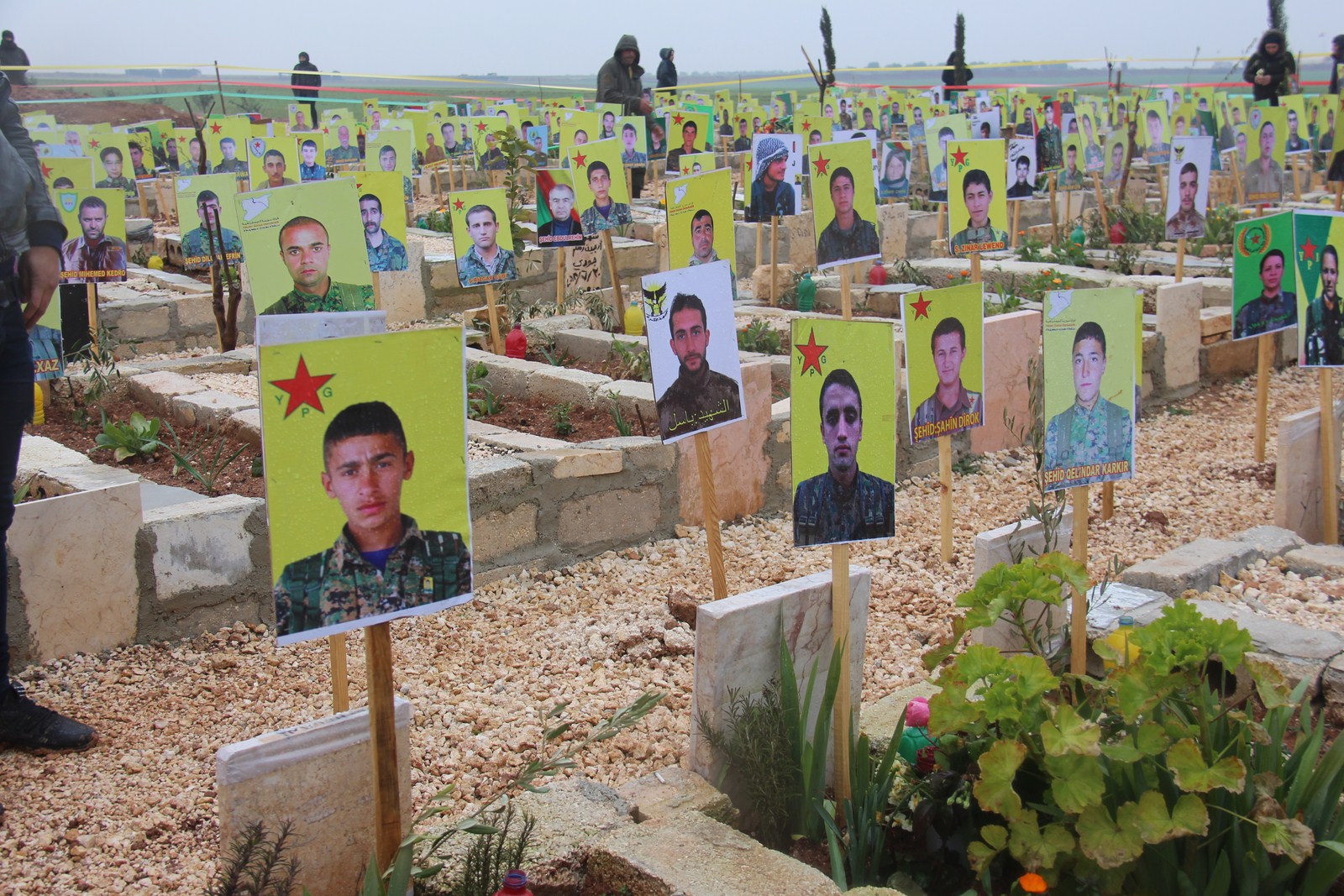 The city's IDPs called on the international community to break its silence about Turkish cri...

After its shelling of the villages of Maranaz and Alqamiyyah in Shera district, the Turkish ...
Old Website