Rapid developments on the political and military arenas in Idlib Syrian governorate which have been experiencing heavy fighting since late January, following attacks by regime forces with Russian support to regain control of the international road Aleppo-Damascus.

As the Syrian regime advances and completes control of the road, which achieves the goals of its military offensive according to observers, other developments are occurring on the ground related to the Turkish side which was targeted twice by the Syrian regime, killing 13 Turkish soldiers.

That required the Turkish side to mobilize a large number of forces in Idlib, coinciding with the Turkish officials issuing threats to launch military action to return the Syrian army behind the Turkish control points that were set up under the Sochi agreements.

While the situation is still fraught at least in the media, Hawar news agency held a dialogue with the spokesman for the Democratic North Brigade Mahmoud Habib on the latest developments.

Mahmoud Habib said: "I think that the developments in Idlib are a deliberate and coordinated process between the Russian and Turkish side, away from the battles and media misinformation that are taking place and the threats between the Russian and Turkish sides. We still believe that there is a great coordination and we will see Idlib at its worst if it is controlled by Turkey and certain areas designated for Turkey and its factions of the Muslim Brotherhood. The region will be a small canton of Syrian lands that has been given to Turkey in exchange for its interests for the regime and Russia throughout Syria.

He pointed out that the content of the Sochi and Astana agreements is not disclosed to the media, pointing out that what is happening now is a complementary to what was agreed upon under the table. What is happening is the sharing of influence and control. I think it is the hidden side of the Astana and Sochi agreements. I do not think that these agreements fell on the contrary, they are being implemented in full swing behind the closed doors, and very soon we will find a new map for the position of these forces and control of the land as agreed upon."

Habib underestimated the seriousness of the Turkish threats saying that they do not exceed the media side.

He added: "We must know that what Russia and Turkey are doing in northwestern Syria is not far from what was agreed upon in Russia and Turkey's military and political multiple meetings, and the coordination is ongoing in full swing. I do not think that the agreements have actually fallen even if they threaten to bring them down in the media.

Turks, Russians coordinate at all levels

The spokesman for the Democratic North Brigade Mahmoud Habib said that what is applied on the ground now is the part that has not appeared on the media, and I do not think that the Russians and Turks who meet and coordinate at all levels will disagree and that a dispute will be between them over sharing in Syria.

The recent escalation justifies as follows: "It seems that the embarrassment that afflicted the Turkish side in Syria and the reactions inside Turkey prompted the Russians and Turks to act the hostility that we see now to justify the withdrawal of the Turks to the points agreed on in line with the desire of the Russians to restore the regime's control over the entire Syrian geography. After the charade, the Russian military machine will stand at the limit agreed upon by the Russians and Turks in the secrecy of the meetings."

The military escalation puts the political solutions aside

He added: "But if we imagine that this military fanfare fabricated by Russia and Turkey has ended in a certain form of agreement on the division of influence and control, then we can read the short-term political circumstance which is that all parties in Syria will be called upon to draw up a political map for the next solution in Syria."

The official spokesman for the Democratic North Brigade Mahmoud Habib expected that there will be a major international intervention in determining Syria's political fate in terms of writing the constitution and the participation of all components in the final solution in the long run.

And he expressed his belief that this will be far from the regional conflicts and there will be a major international effort in which the United Nations will intervene. Russia and America will be influential in developing a comprehensive political map for all components of the Syrian people and agreed upon by all.

But for the time being, Mahmoud Habib says at the conclusion of his speech that currently and as long as there are tense military situations, I believe that the political solutions, if they are proposed for circulation, are useless and not placed on the track of implementation.

The politician, Mohammed Hussein pointed out that the project of the democratic nation and O...

Rasoul: Project of Autonomous Administration not of one party

According to the writer Melvan Rasoul, the leader, Abdullah Ocalan's message which he sent t...
Old Website

Commander of Iran Quds Force in Baghdad to form government 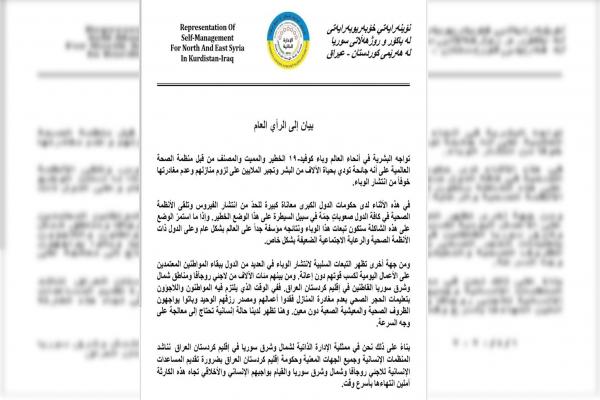 AA's representative in Başûr appeals from government to help refugees in NE, Syria

Gaza manufactures muzzles and protective cloths against Covid- 19 under siege