The Badirkhani family son that migrated from Butan to Cairo, Meqdad Medhat Badirkhan began printing the " Kurdistan "newspaper on April 22, 1898, since then, the Kurdish Press Day has been on the 22nd of April.

It did not stop under pressure

During the past 122 years, the Kurdish journalists have been displaced, killed, pressured, arrested and obstructed in the four parts of Kurdistan, and forced to continue their work in the diaspora. They overcame all their difficulties through dozens of television channels, newspapers and artistic, political and literary and cultural magazines which in the Kurdish people awareness, history and culture.

The Kurdish press began from the Egyptian capital, Cairo, where Kurdistan newspaper was printed. Today it is able to reach the whole world through the visual, audio and read media.

In this section of the file, we highlight Kurdish Press during the Ottoman period.

"Kurdistan" newspaper was a historic leap for the Kurdish press, in Cairo on April 22, 1898, by Meqdad Medhat Badirkhan, who was exiled by the Turkish state to Cairo. The paper was printed in Arabic letters and faced the Ottoman pressures since its publishing, Despite these pressures, a member of the Badirkhan family, Abdul Rahman Beik, continued to publish the newspaper and its sixth edition was printed in Geneva, some of the editions were in Kurdish while others were in Kurdish and Turkish. the pressure on  the newspaper forced it to change the place many times, the editions from 6 and 19 were printed in Geneva, from 20 to 23 in London, and from 24 to 26 in Folkstone, and again the numbers 30 and 31 were printed in Geneva.

It was published secretly

The Ottoman Empire banned the Kurdistan newspaper at the beginning of its inception, so it was published secretly in the Kurdish regions, the Levant, Adana and Europe. The Ottoman measures were not limited to the newspaper's employees, but included those who bought the newspaper and imposed harsh penalties on them.

The newspaper focused more on language issues than politics from the beginning, but in Geneva, it adopted a liberal-democratic language and abounded against the Ottoman Sultan, Abdul Hamid II. At its third phase when Badirkhan ran the paper from Syria, the newspaper was delayed in London, Folkstone, Geneva and Cairo. In 1902 the newspaper stopped after the publishing 31 issues. So Kurds celebrates Kurdish press day on April 22, the date of the first Kurdish newspaper.

Badirkhan family published another paper that was called "Omid" during the publication of the Kurdistan newspaper. The semi-monthly "Omid" was also printed in Egypt but the number of its editions is unknown. According to the Gregorian calendar, the first issue of the newspaper was on September 1, 1900. The newspaper's policy could be defined through the phrase that "Omid newspaper  used to write as headline "in the service of the nation and the people". A political newspaper about the concerns of the people."

After the declaration of the second legitimacy in the Ottoman Empire, narrow windows were opened for the press and publishing, at that point the national thought that spread from Balkans had an impact in many areas of the Empire, as a result, the Kurds organized themselves and published new Kurdish newspapers and magazines, the Association "Kurd Tafon and Wal Taraqi", was founded then by Sheikh Obaidullah Nehri, Sayyid Abdul Al Qahir, after a short while the association issued "Kurd Tafon-Wal Taraqi" paper.

For the first time, Sorani dialect

The Kurdish Movement for Support and Development was founded on September 19, 1908 in Istanbul, and the Kurdish Movement for Support and Development newspaper was its media wing, after a month and a half, the newspaper began publishing on October 9, 1908 in Istanbul. The newspaper franchise was Suleiman M. Tawfiq. It was a weekly newspaper, a religious, scientific, political, literary and social newspaper. What distinguishes this newspaper from Kurdistan paper is that it was in both dialectics of Kurds: Sorani and Kurmanji, so in this is considered in this newspaper regard.

Teaching in the mother tongue

The newspaper's forefront was given for the Kurdish literature,  it called on Kurds to demand opening the Kurdish schools.

The newspaper lasted about nine months and spread throughout Kurdistan almost all over Kurdistan. But like many newspapers, it was forced to shut down during the events of "March 31", where writers and newspaper staff were arrested and imprisoned in the then-notorious "Bakroğlu Bloko" prison.

publishing between the Balkans and Kurdistan.

Al-Sharq and Kurdistan newspaper, was the second newspaper published during the second phase of legitimacy in the Ottoman Empire on October 20, 1908 in Istanbul and was a bi-monthly newspaper of 4 pages in Arabic, Turkish and Kurdish. How many editions were published of the was unknown but it focused on Kurds in Kurdistan and Bosnia and Herzegovina, and does not know the extent of any relation  with any Kurdish organization or not.

In the second period of legitimacy, Al Hurriya was published in late 1908. The newspaper's franchisee was our religious notable, Zada Rifaat, the son of the well-known writer Abdul Rahman Najm,  member of the well-known Mawlana zada family in Sulaimaniyah.

Zada Rifaat was one of the pioneers of the Kurdish national movement in the early 20th century. He was known as a journalist, publisher, writer and politician. 770 editions of the newspaper were published.

Rogi Kurd published on June 6, 1913, had a picture of Salahddin ,the great Muslim leader, on its cover. Roji Kord, published by the "Hope Association" of the Kurdish students,  and founded on July 27, 1912 and had 4 issues of Roji Kurd magazine in Kurdish and Turkish.  On September 12, 1913, the last issue of the magazine was published.

Roji Kurd magazine had a major influence on the cultural and political movement of the period but was under a lot of pressure from the Ottoman authorities.

Yekbun was the second newspaper to be published by Hope Association  in addition to Roji Kurd. It was published in Istanbul in September 1913 once every three days to introduce the Kurds and raise their rank in the Ottoman Empire and the Muslim world.

A month and a half after suspending Roji Kurd newspaper, Hatawi Kurd was issued by Hope Association on October 24 as an extension for Roji Kurd. It issued nearly 10 issues until mid-1914, when the World War I began. The Ottoman Empire recruited the majority of members of all the Hope Association. During the war, the association stopped publishing Hatawi Kurd..

It was published in The Iraqi capital, Baghdad in 1914 by Jamal al-Din Baban in Turkish and Kurdish and comprised 24 in each issue, all of which numbered only 5. The newspaper stopped in the early World War I.

After the World War I, the Ottoman Empire collapsed and began another phase that extended until 1922, at that point, the Kurds organized themselves and avoided the negative repercussions of World War I. On the other hand, they embarked on a national political struggle in accordance with the "Wilson Principles"

In Istanbul in 1918, the "Transcendence Association" was founded with branches in Amed, Badalis, Dersim and Gharbet, through them,Tamim Kurdish wekipedia, Hope Association, the Kurdish People's Party publication went on, JIN magazine, KURDISTAN magazine and SERBEST newspaper continued its work.

JIN Magazine published its first issue on November 7, 1918 and dealt with religious, social, literary and economic topics and continued as such until its 33rd issue and then moved on to national, human rights and Kurdish issues. The magazine published at least 36 issues and stopped in late 1920.

The magazine was published in Kurdish cities and dealt with Kurdish and historical issues of language, literature, education, women and folklore.

Kurdistan Transcendence Association issued KURDISTAN magazine alongside JIN magazine. It was printed in Istanbul and published  in Turkish and Kurdish, in more than 30 issues.

Despite pressure from the Ottoman Empire, Kurdish newspapers and magazines continued to operate in different regions even after Kurdistan was divided into four parts after World War I. Tomorrow: Kurdish press in the four parts of Kurdistan. 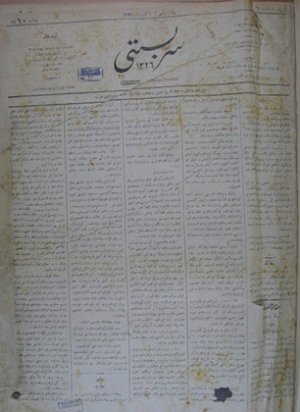 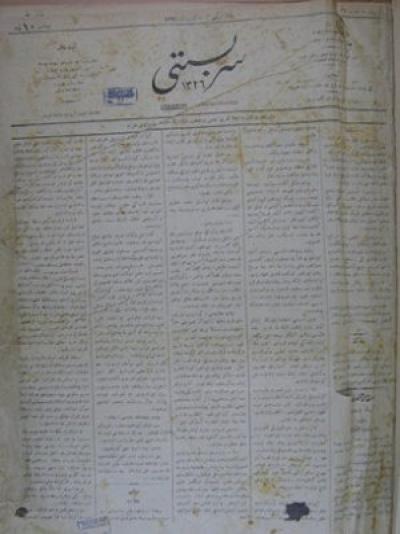 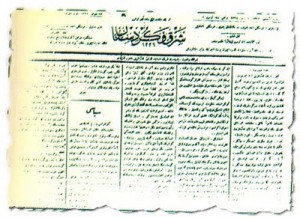 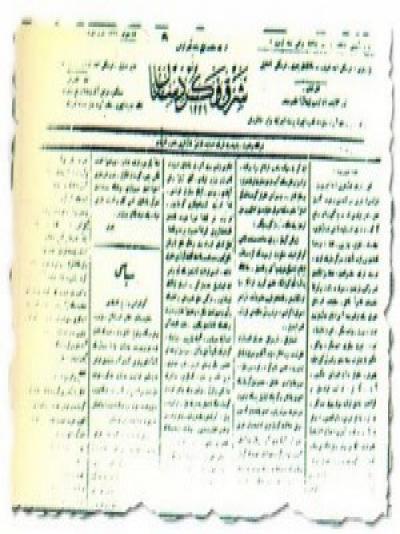 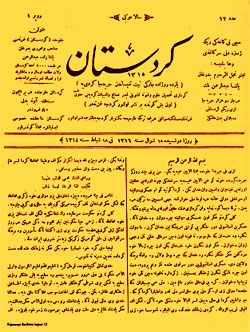 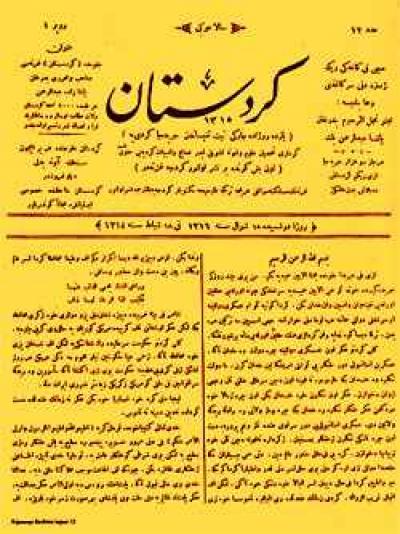 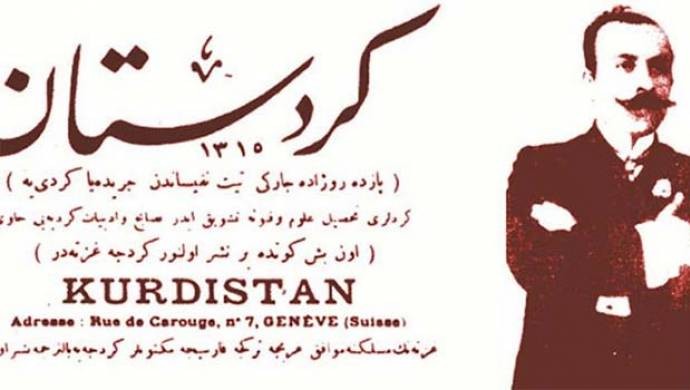 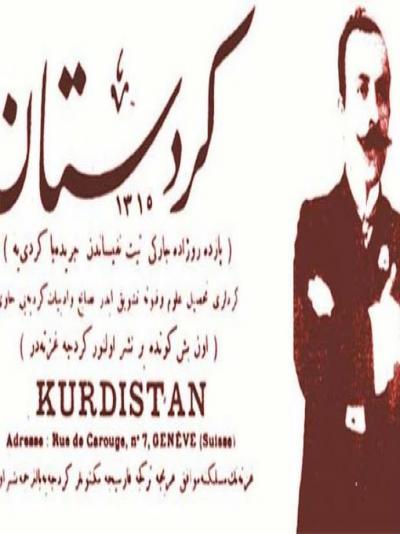 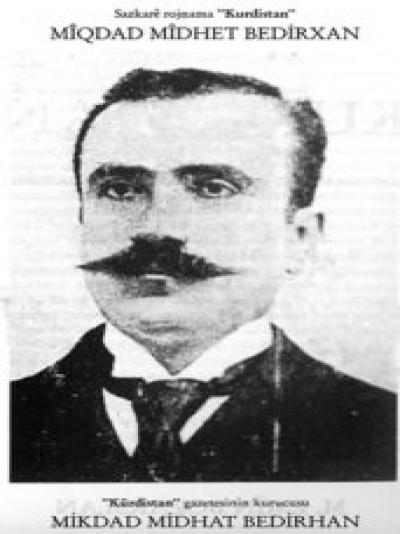