The Turkish state continues to invade and violate the northern and eastern regions of Syria, with the aim of occupying and expanding in the region to turn it into a purely terrorist area, to serve its interests.

As its attacked began in October 9, more than 300,000 civilians were forcibly displaced from their areas in the villages of Gire Spi/ Tel Abyad and Serekaniye. Hundreds of civilians lost their lives and were wounded, currently residing in shelters within schools, or in displacement camps, the Autonomous Administration established in accordance to its own capacity and potential, with international organizations procrastinating and evading their responsibilities in humanitarian relief and meeting the needs of the displaced at all levels.

In the context of Turkish attacks and its violations on the regions of northern and eastern Syria, our agency conducted with notable of Marashda clan, Asad Al-Mounadi in al-Susah area of ​​the eastern countryside of Deir Ezzor, Mounadi affirmed their rejection of any form of occupation by the Turkish state, indicating that the global countries influencing the Syrian situation has a hand in the crime of Erdogan, his mercenaries, and his army.

In his speech, al-Mounadi explained, "The aim of the Turkish state is to destroy the Syrian people, weaken and deplete its resources and energy, as well as its attempt to provoke some of the great countries to benefit from them at all levels and to export its internal and economic crisis abroad."

Al-Mounadi noted, "If Turkey claims that it wants to establish a safe area, then it must first return the usurped Iskenderun and make it a safe area for the Syrian people. If it is true to its allegations, that Iskenderun is a Syrian land with a large area rich in wealth and resources, through this it gives the Syrian people their rights on their territory, it does not have to usurp new lands and then return them to us. "

"We all know that when the Ottoman state withdrew from the lands of Syria, it plundered the goods of Syria from the crops of wheat, barley and seeds, and it wreaked corruption and ignorance in the region. This has led to human famines and a social crisis that afflicted the Syrian people, so we totally reject the policy of Erdogan and his party and all regional states that follow Turkish example, destroy our values ​​and our gains."

In the midst of his speech, Al-Mounadi stressed the necessity of solidarity, saying, "We, the children of Syria and the peoples of northern and eastern Syria, must take more care and seriously circumvent our cause, and we confirm our rejection of the Turkish aggression and resist the Turkish killing and destruction machine that Erdogan uses to kill and displace the Syrian people in northern and eastern Syria."

The notable of Marashda clan, Asad Al-Mounadi in Al-Susah area of ​​Deir Ezzor countryside concluded his speech by saying, "The Syrian people must unite opinion and rank against the occupier, so all the people of Syria chant (the Syrian people is one), so we should be all united."

The Turkish occupation army and its mercenaries are bombing intensively Tel Madiq village in...

Meanwhile, drones belong to the Turkish occupation are hovering over Tel Tamr district in al...

Afrin people who were displaced to al-Shahba canton and the villages of Sherawa district den...
Old Website

6 years passed, AA made an alternative to the nation-state and solution to Syrian crisis 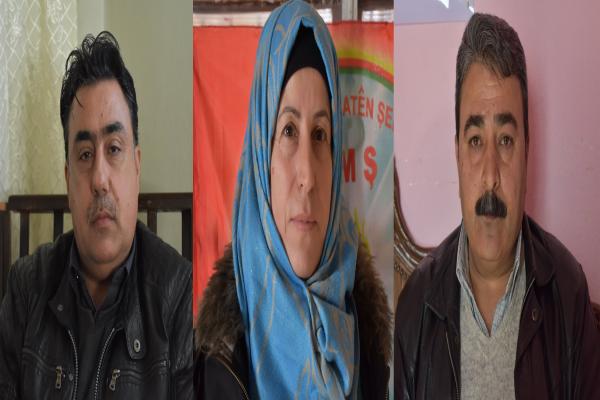 ​​​​​​​Politicians, intellectuals, martyrs' mothers: Our unity is evidence of our strength