During the past week, Arab newspapers covered the Syrian situation, in addition to Turkey's moves in the region, as well as the Libyan crisis.

The start with the Syrian issue, as Al-Sharq al-Awsat newspaper said: “Three political blocs in the opposition (Syrian Negotiating Committee) resorted to the UN envoy Geir Pedersen, Russia and regional countries to deal with Turkey's influence in (the Commission) and (the Constitutional Committee) and Ankara's dominance of political decision. At a time, Pedersen finalizing the fifth round of (Constitutional) meetings next Monday, to start for the first time discussing the essence of the Syrian constitution. "

The newspaper pointed out that Pedersen is up for a round of the "committee" meeting to deal with the constitution drafting, according to the agreement between the government and the opposition "committee", after rounds held in more than a year in which the division dominated, Damascus wants to discuss " National principles, ”and the opposition wanted to discuss“ the introduction to the constitution and its principles. ”

The UN Office for the Coordination of Humanitarian Affairs (OCHA) says more than 8 in 10 Syrians suffer from poverty, and the WFF estimates that 9.3 million inside Syria suffer from food insecurity.

But for Pedersen, “the signs will worsen” for various reasons, including “a decade-long-conflict impact, the declining of the global economic conditions due to the Coronavirus pandemic, the repercussions of the Lebanese crisis, and internal factors such as the war economy, corruption, mismanagement, and external measures (sanctions, isolation), as a divided society faces a further disintegration of its social fabric, which creates more suffering and more instability.

All this leads to a warning of a "slow tsunami that could hit Syria", and in addition, with high inflation rates and a shortage of bread and fuel, it is expected that the Syrian government and other de facto authorities will be unable to provide basic services and support for basic commodities.

The past ten months had been " the calmest in the crisis life" since 2011, where in 2020, the engagement lines barely changed, but this calmness is fragile and could fade away at any moment.

The indicators of this are; firstly, the latest escalation in the vicinity of the Ain Issa in the northeast of Syria, secondly, the intensification of the Israeli-attributed airstrikes, third, the ongoing attacks of the ISIS in the east of Syria and its Badia, fourth, mutual attacks in southern Idlib and its vicinity, fifth, turmoil in the southwest of the country.

In light of the internationalizing the crisis to a large extent, Pedersen says, "We cannot pretend that the solutions are in the hands of the Syrians only - or that the United Nations can do it alone."

As for Pedersen, who is preoccupied with (penetrating the constitutionality), he was surprised by what it does not count, as the representatives of the (Cairo Platform), (Moscow Platform) and (Coordination Commission), which are the main forces in the (Negotiation Commission) that represent (the opposition) in meetings of the (Constitutional Committee), by sending him a letter in order to contribute to resolving a problem within (the Commission).

The technical dispute is centered about the representation of independents, who were elected at a conference in Riyadh late 2019 to represent the 8-member independent bloc in the "commission". It also talks about the representation of the "Cairo platform" in the "commission". Within a year, a set of proposals were submitted to settle the dispute over the independents, including the old and new members' share of the independent bloc are among members between the “commission” and the “constitutional committee” (5 for 3 or 6 for 2). However, this did not materialize, and the other bloc, the “Coalition”, controlled the formation and elections mechanism and naming the representative of the “Cairo Platform » a few days ago.

The three blocs appealed to Pedersen to intervene and resolve the dispute, based on Resolution 2254 of 2015, which stipulated “an aspiration for the envoy to finalize efforts to achieve an end”, the unity of opposition forces, with the Cairo and Moscow platforms mentioned.

Most likely, Pedersen will not take role this technical-political file, but rather wants to focus on the meetings of the "Constitutional Committee", at a time, it is believed that the three "guarantors" of the Astana process, Russia, Turkey and Iran, will work to discuss this file at their political meeting in Sochi, Russia in next month.

Concerning the Turkish issue, Al-Arab newspaper said: “Turkey showed surprising flexibility with the immigration file in a never-like-before step that observers said aims to appease the Europeans and normalizes the course of relations in fast pace, while reports speak of a European desire to coordinate positions with the United States in confronting it.

Observers believe that Turkey's giving up the escalation policy is a positive sign for the European Union countries that are concerned about a flood of immigrants, and they have already faced this when hundreds of them flowed into the Greek islands after Erdogan carried out his threats.

They point out that the goodwill messages initiated by Turkish officials do not give Ankara a blank deed in order to quickly turn the page on differences, but it can be built upon to dispel the climate of mistrust that dominates Turkish-European relations.

In return, the European Union needs to cool down the existing tensions, while its member states face divisions over migrant quotas as well as over asylum applications.

It is anticipated that the Union will loose the ropes of friendliness of the Turkish partner as part of correcting the course of relations, in order to get rid of the burdens of the immigration file that weighs on its countries and exacerbates divisions between them.

In several files, such as the gas exploration crisis in the eastern Mediterranean, and the migration file, Ankara retreated from its pledges, which made it unreliable in a number of European Union countries, especially Greece, which adheres to confronting Ankara's behavior through more resolute mechanisms instead of diplomatic mechanisms that did not bear fruit.

Observers say that Turkey's recent initiatives to calm down with the Europeans by showing flexibility in the migration file and accepting to sit at the negotiating table with Greece, carries a kind of credibility this time due to the international and regional changes that threaten to deepen Ankara's isolation unless it adjusts its behavior and agendas in light of these changes.

Ankara is seeking to accelerate normalizing relations with its European opponents and to ease the atmosphere before the new US President, Joe Biden, takes office on January 20, in light of talk of a European desire to coordinate with the United States to confront the Turkish agendas.

'The Libyan Dialogue ... Consensus on the elections and ending the transitional phase'

On the Libyan issue, Al-Bayan newspaper said: “The Libyans are close to an executive leadership that will lead the transitional phase leading to elections. The United Nations Support Mission in Libya announces the results of the vote among members of the Political Dialogue Committee on the mechanism approved by the Advisory Committee during its meeting Geneva last week, while the mission said that the Acting Special Representative of the Secretary-General of the United Nations in Libya, Stephanie Williams, took part through artificial intelligence technology in a digital dialogue with a thousand Libyans and Libyans from all regions of Libya and others from outside the country.

According to the mission, more than 70% of the participants agreed that the results of the advisory committee meeting were positive, and expressed their hope that these results would lead to a permanent solution, but they expressed their fear of the obstacles that the current situation might impose, and 76% of the participants supported Elections are held on December 24, 2021, and most of them have called for an end to the years-long transition period.

And 69% of those who participated in the dialogue believed that "it is necessary to form a unified interim executive authority in the period leading up to the elections."

The participants expressed their support for the ceasefire agreement, and called for the removal of mercenaries and foreign fighters.

Leader of the Asaib Ahel al-Haq, Qais Khazali said that plans are being hatched by Turkey to...

Today, the Turkish Ministry of Defense announced that a military helicopter crashed in North...

The Russian Federal Security Service announced, Thursday, the arrest of a person who was pla...
Old Website

Hajj Farhan: Terror attacks on Rojava, its people in the center of Hewler 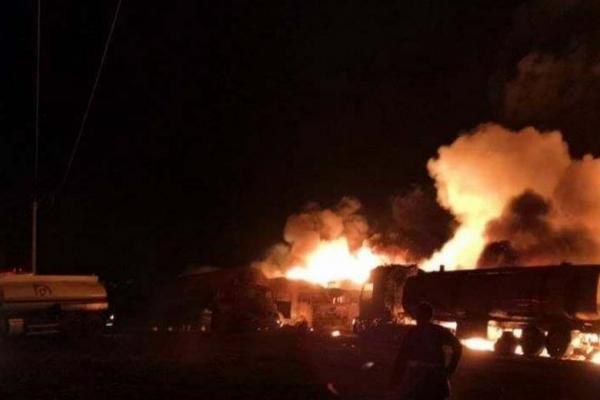 SOHR: 4 killed, 24 wounded due to targeting Oil refinery in Jarablus

- Politicians: community organization must be strengthened to counter attacks north and eastern Syria