The 4th Division of the Damascus government imposes a suffocating siege on the two neighborhoods, preventing the entry of the basic materials.

To denounce these practices, thousands of peoples of the two neighborhoods took part today in a demonstration bearing the slogan "No to the siege on the neighborhoods of Sheikh Maqsoud and Ashrafieh, no to the policy of starvation, long live the resistance of free peoples", with the participation of representatives of civil institutions and political parties.

The demonstrators carried placards reading, "We demand freedom of movement between al-Shahba, Aleppo and the rest of the Syrian governorates," "We demand the withdrawal of the Fourth Division's checkpoints from the roads leading to Sheikh Maqsoud and Ashrafieh neighborhoods," and "No to the policy of starvation." 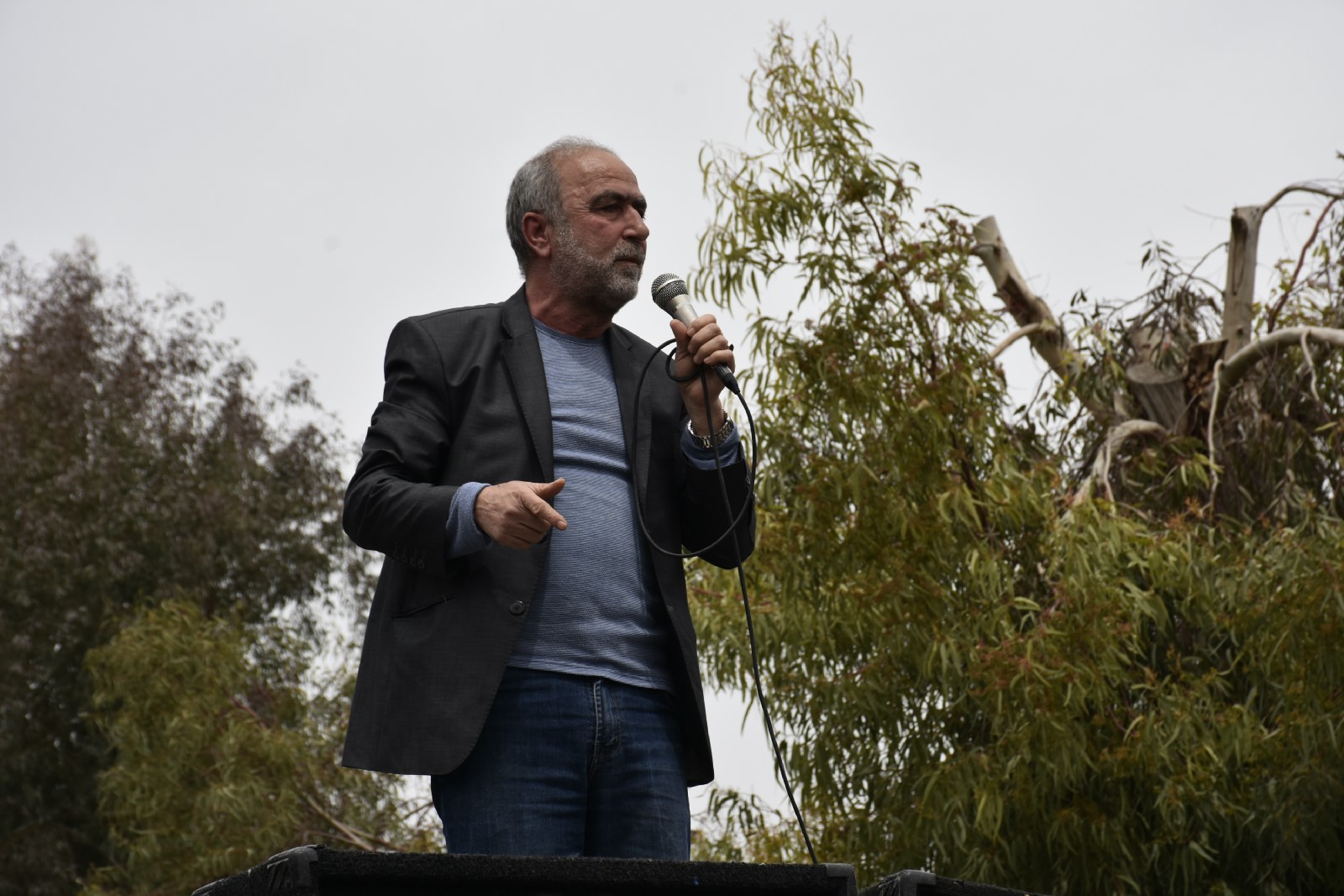 The demonstration headed towards the Al-Jazeera checkpoint of the Fourth Division, amid rising voices condemning the policy of the Damascus government and its arbitrary measures against the residents of Sheikh Maqsoud and Ashrafieh neighborhoods.

A member of the Presidential Council of the Syrian Democratic Council, Marei al-Shibli, gave a speech in which he referred to the Damascus government's spreading rumors that it was allowing flour trucks to pass through to neighborhoods, and said: "We should not be deceived by these baseless allegations."

"We will win and defeat the conspirators and tyrants with the spirit of resistance."

He stressed that "the  components, Arabs, Kurds and Turkmens, will stand in the face of these violations."

"We are not separatists, we protect our existence"

Regarding the arbitrary measures followed by the Damascus government,  he said: "They were imposing their language and culture on us under the slogan of one science, one language and a common destiny, and they prevented us from learning in our language."

He continued, "Ten years ago, what did the Damascus government offer us? It offered us nothing but authoritarian thought, and it exercised all kinds of oppression, but we, in response to its arbitrary policy, loudly say the winds run as our ship wants."

Marei denied the accusations of the Damascus government that the people of Sheikh Maqsoud and Ashrafieh neighborhoods are "separatists", and said: "We have never been separatists, and we, on the principle of the people's revolutionary war, defend our existence and our gains."

Marei pointed out that the goal of the Damascus government by imposing a policy of starvation against the people of Sheikh Maqsoud and Ashrafieh neighborhoods is to subdue the people, and said, "The issue is not an issue of flour and a loaf of bread.  resistant".

Point your weapons at the liberation of the occupied territories.

Marei stressed that the people of Sheikh Maqsoud and Ashrafieh, men and women, old and young will not be satisfied except with a decent and free life."

al-Shibli sent a message to the Fourth Division, its content, "The Golan Road does not pass through Sheikh Maqsoud, there are many occupied areas of Syria, so that your guns and weapons should direct to liberate those areas to Azaz and Afrin."

At the end of the demonstration, a message was sent through loudspeakers to the Fourth Division checkpoint, consisting of three points, which are the demands of the protesting residents:

* Removing all the checkpoints of the Fourth Division around the neighborhoods of Sheikh Maqsoud and Ashrafieh, and the district of Al-Shahba.

* Lifting the siege without conditions and entering the materials.

* Allow the free movement of individuals to the neighborhoods of Sheikh Maqsoud, Ashrafieh and Al Shahba.

The demonstration ended with chanting slogans emphasizing that the determination of the people of the two neighborhoods will not be broken, but will achieve the people's hopes to live in dignity in accordance with the principles of the democratic nation. 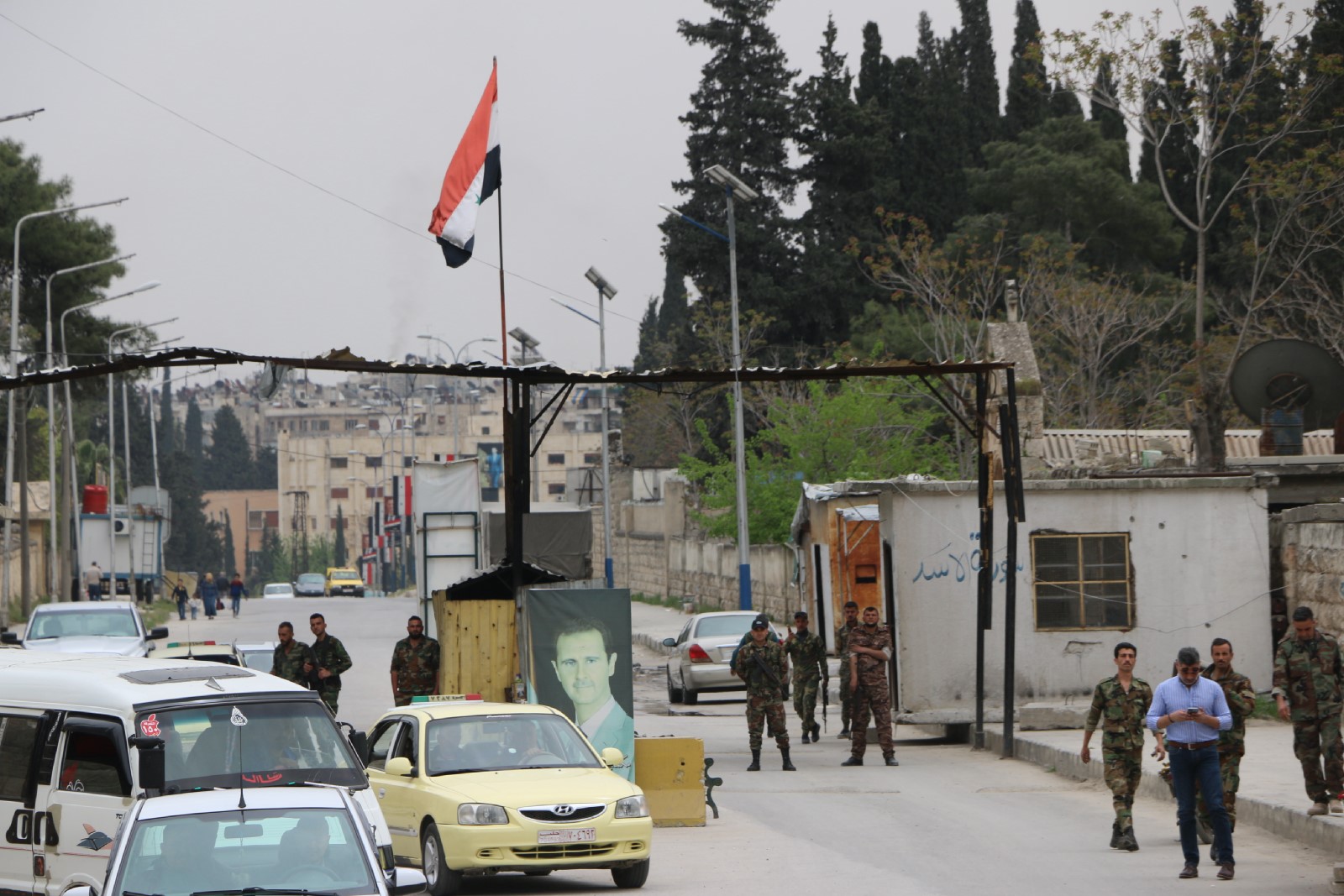 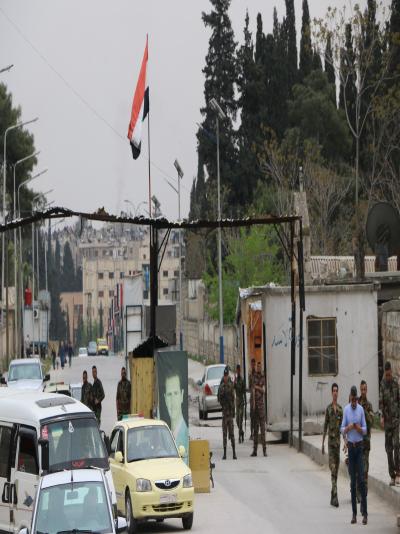 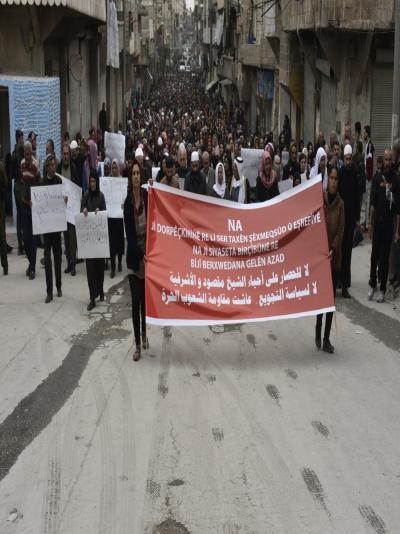 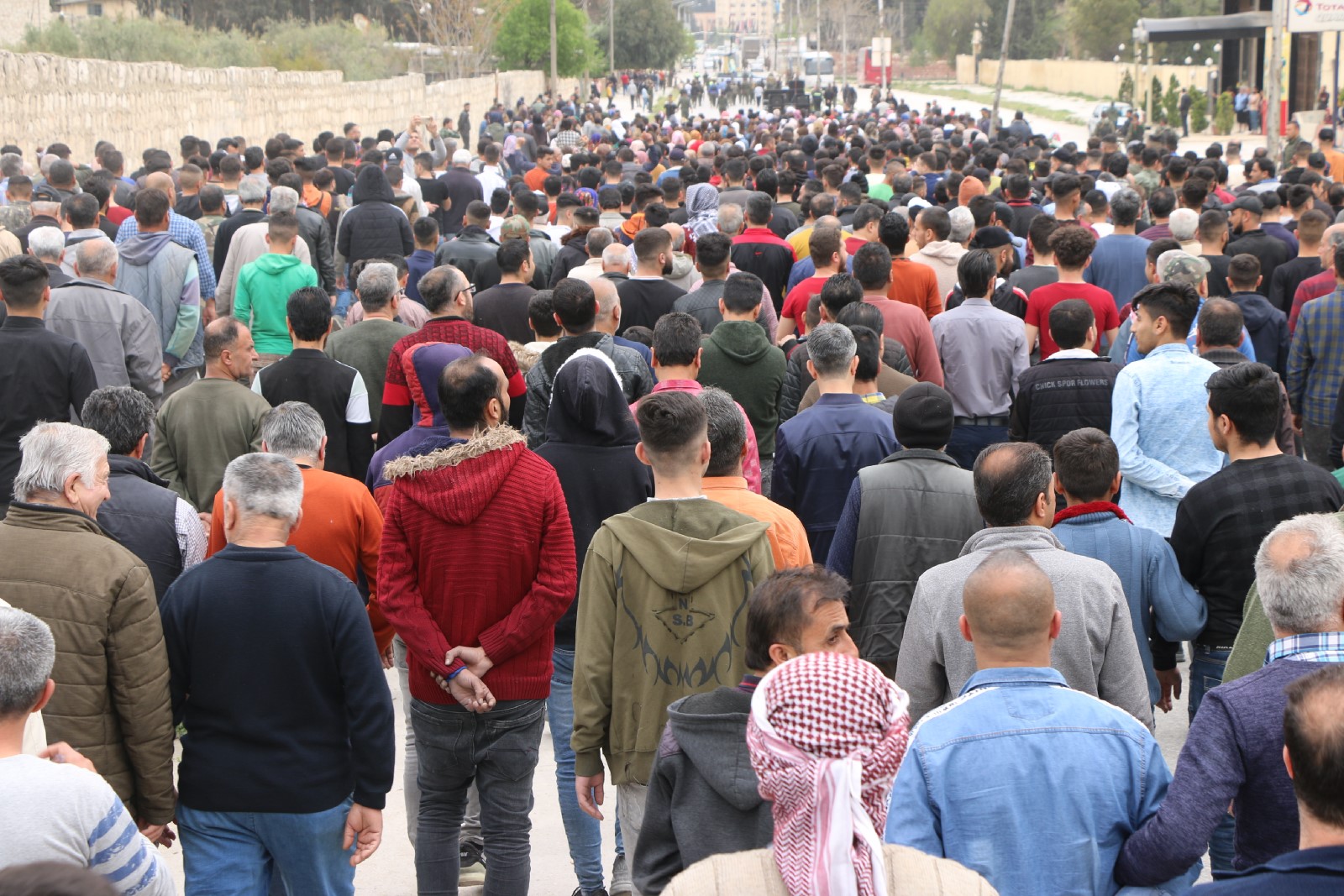 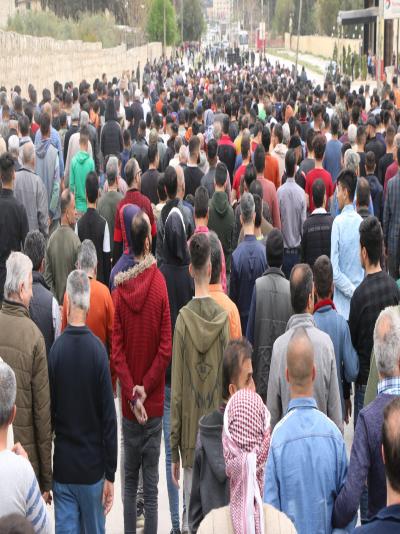 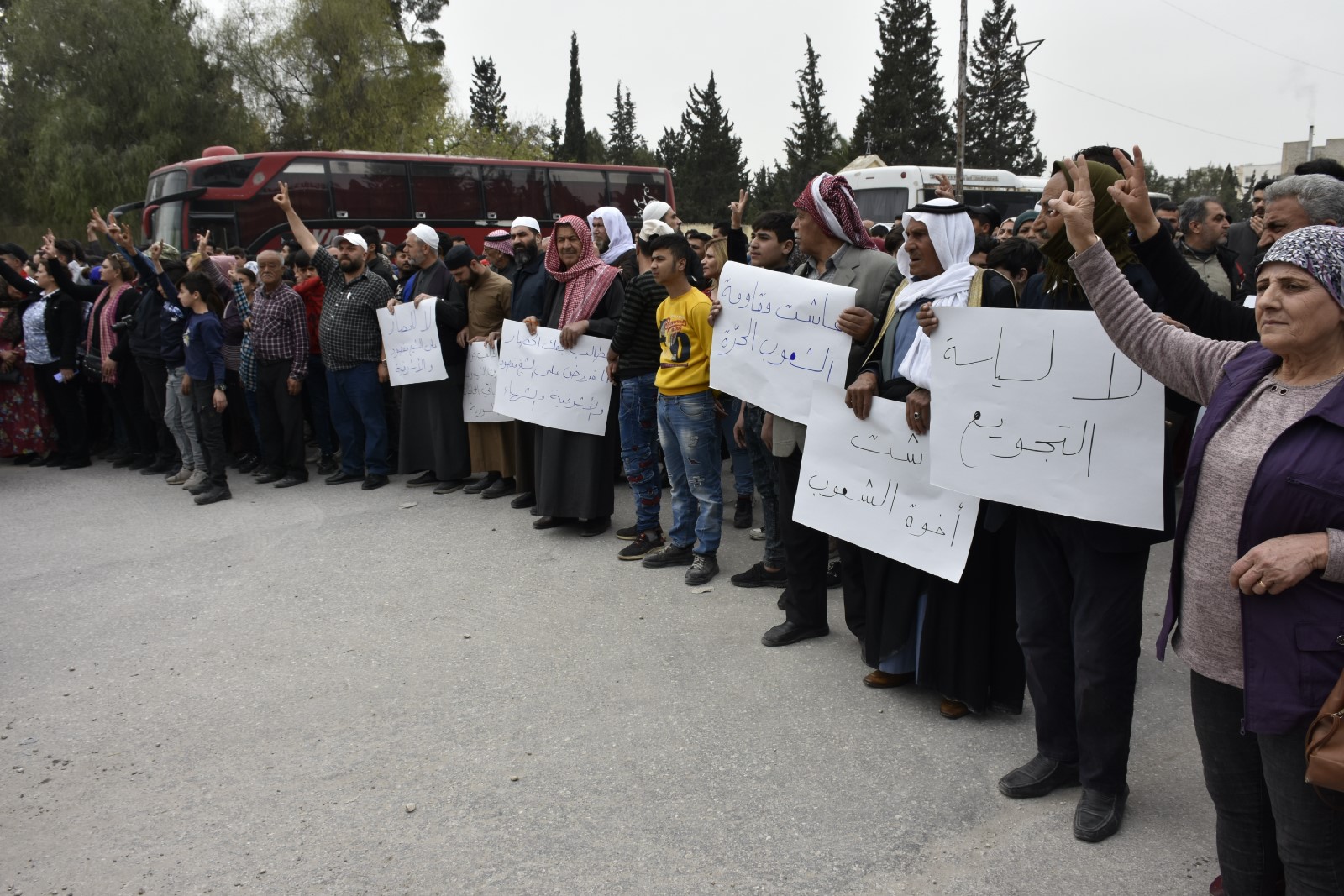 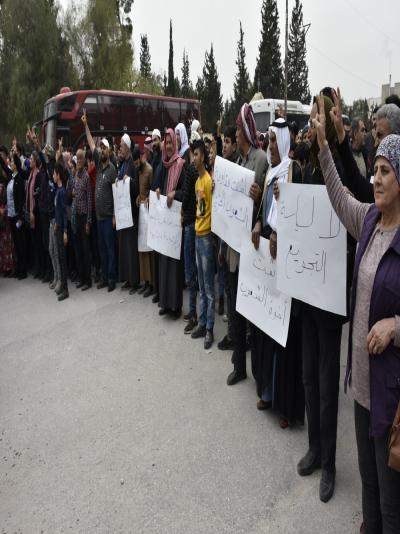 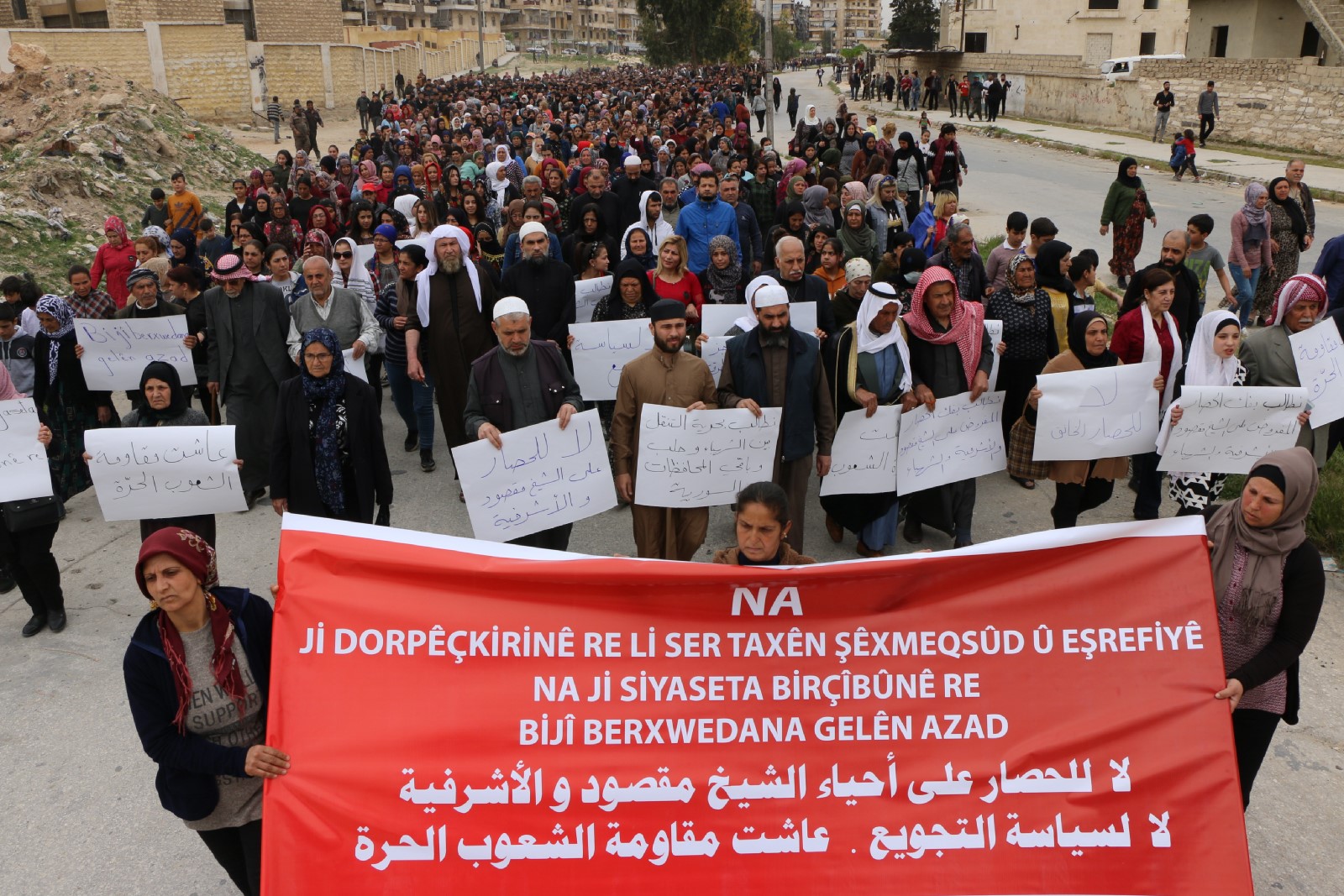 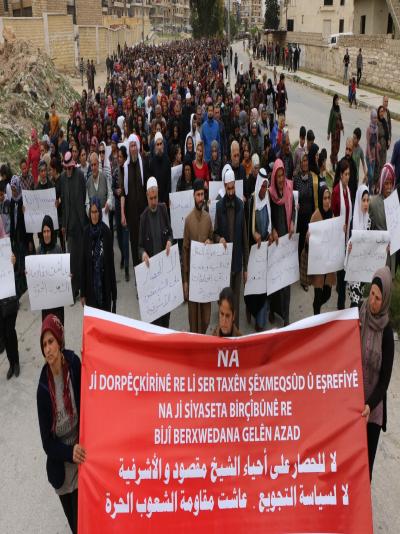 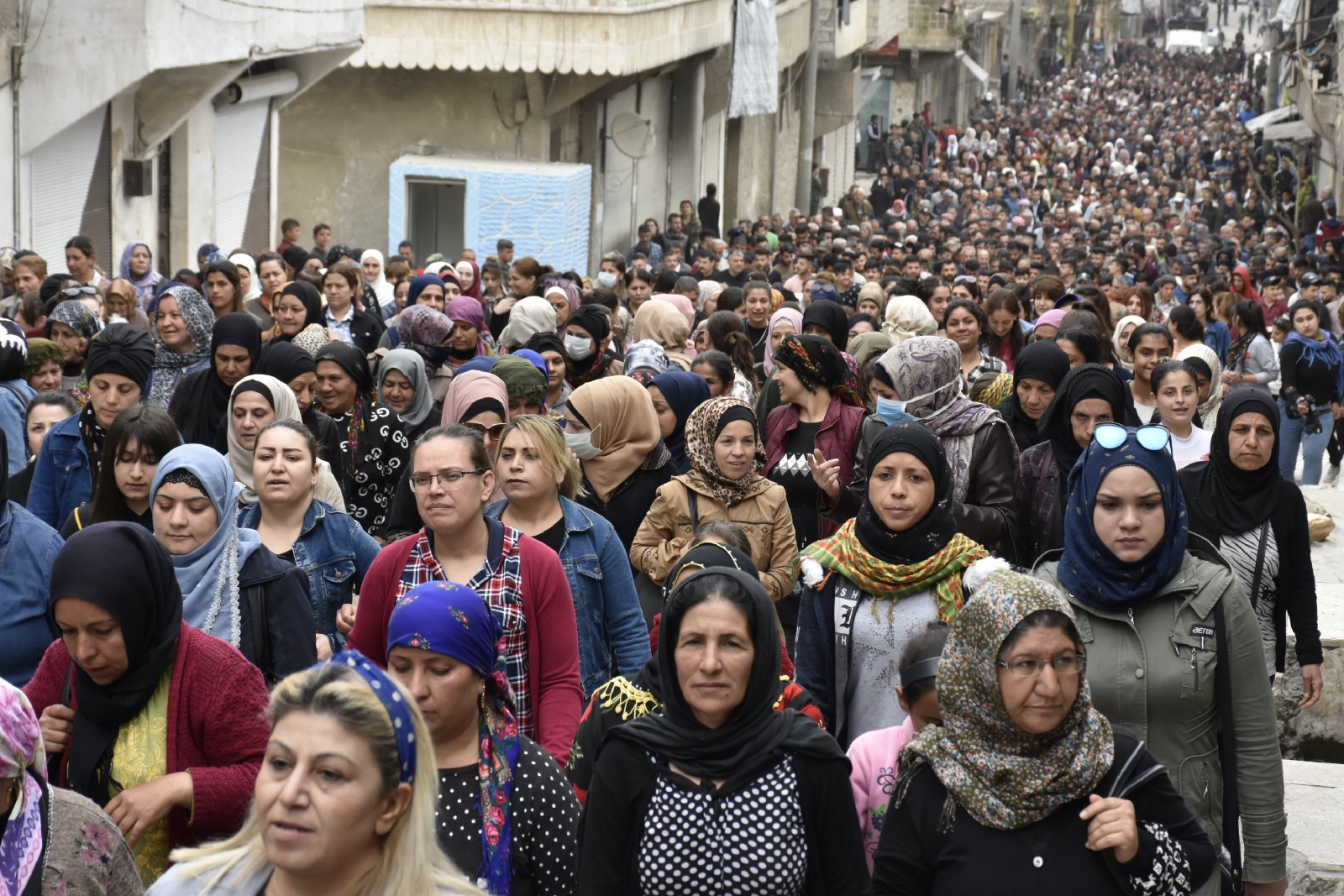 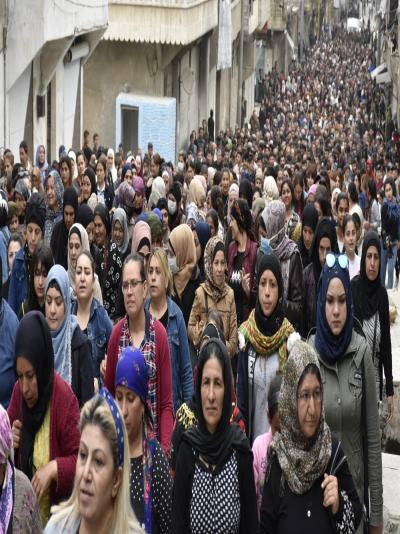 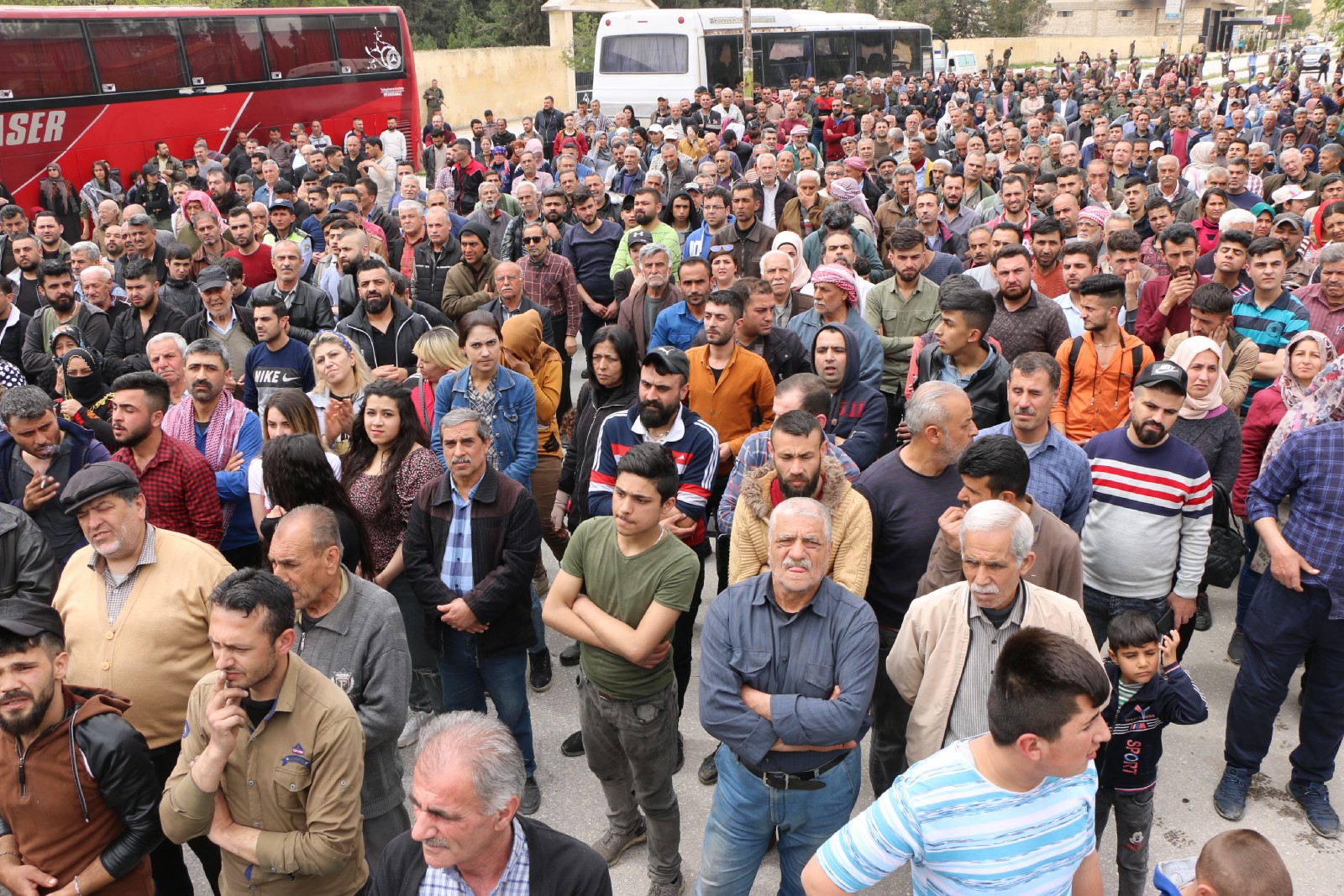 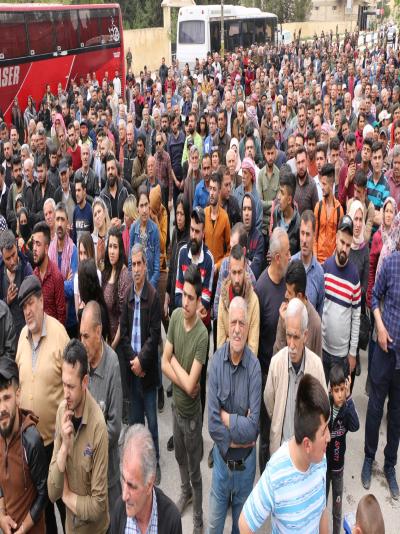 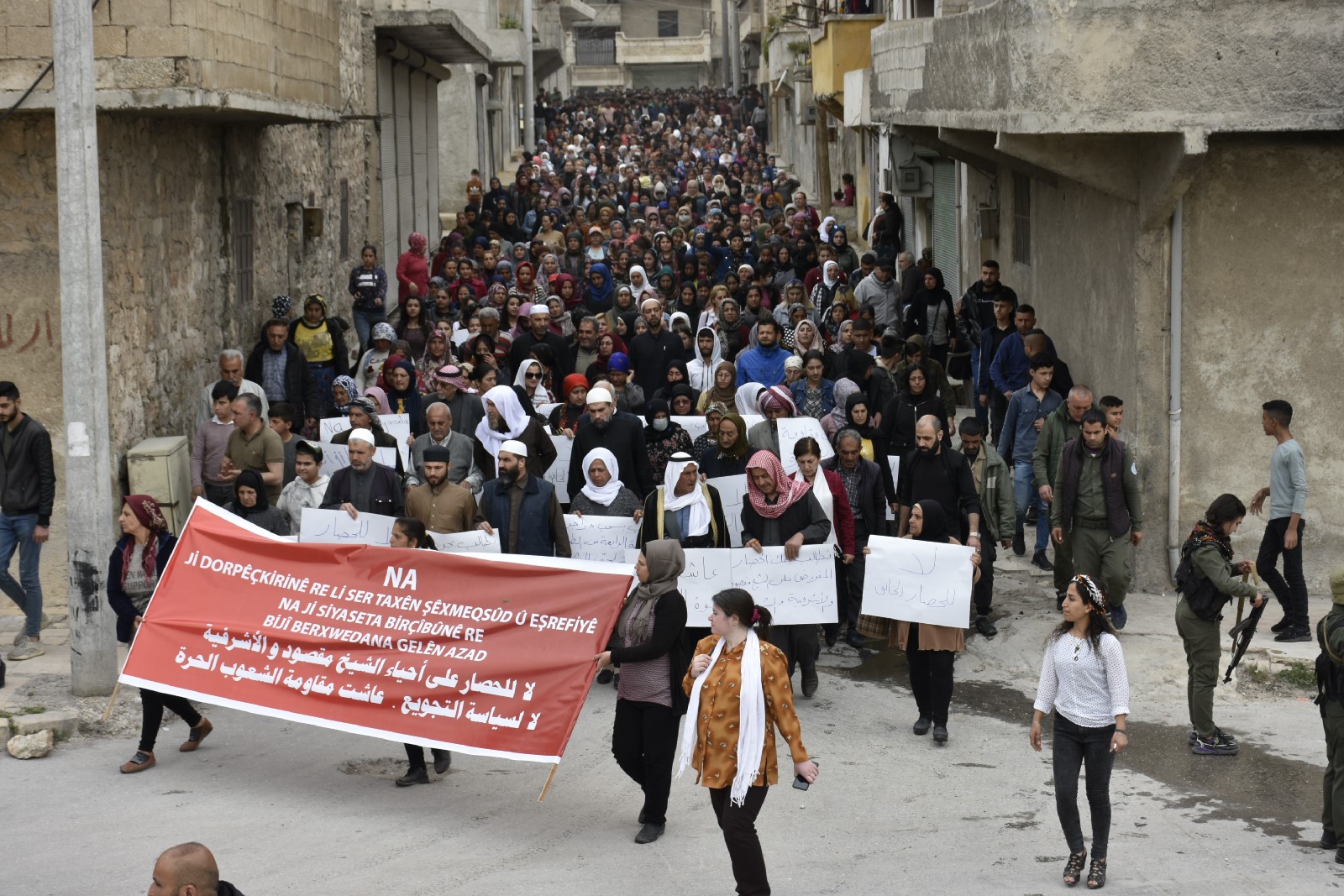 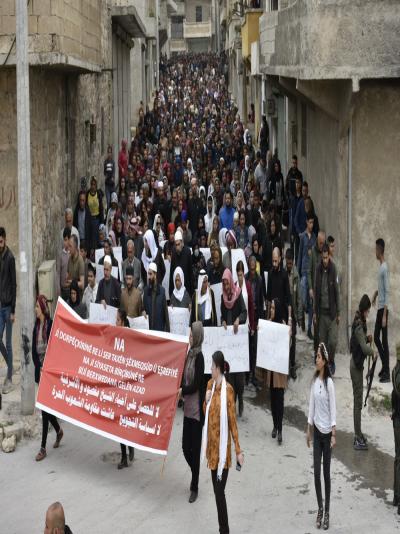 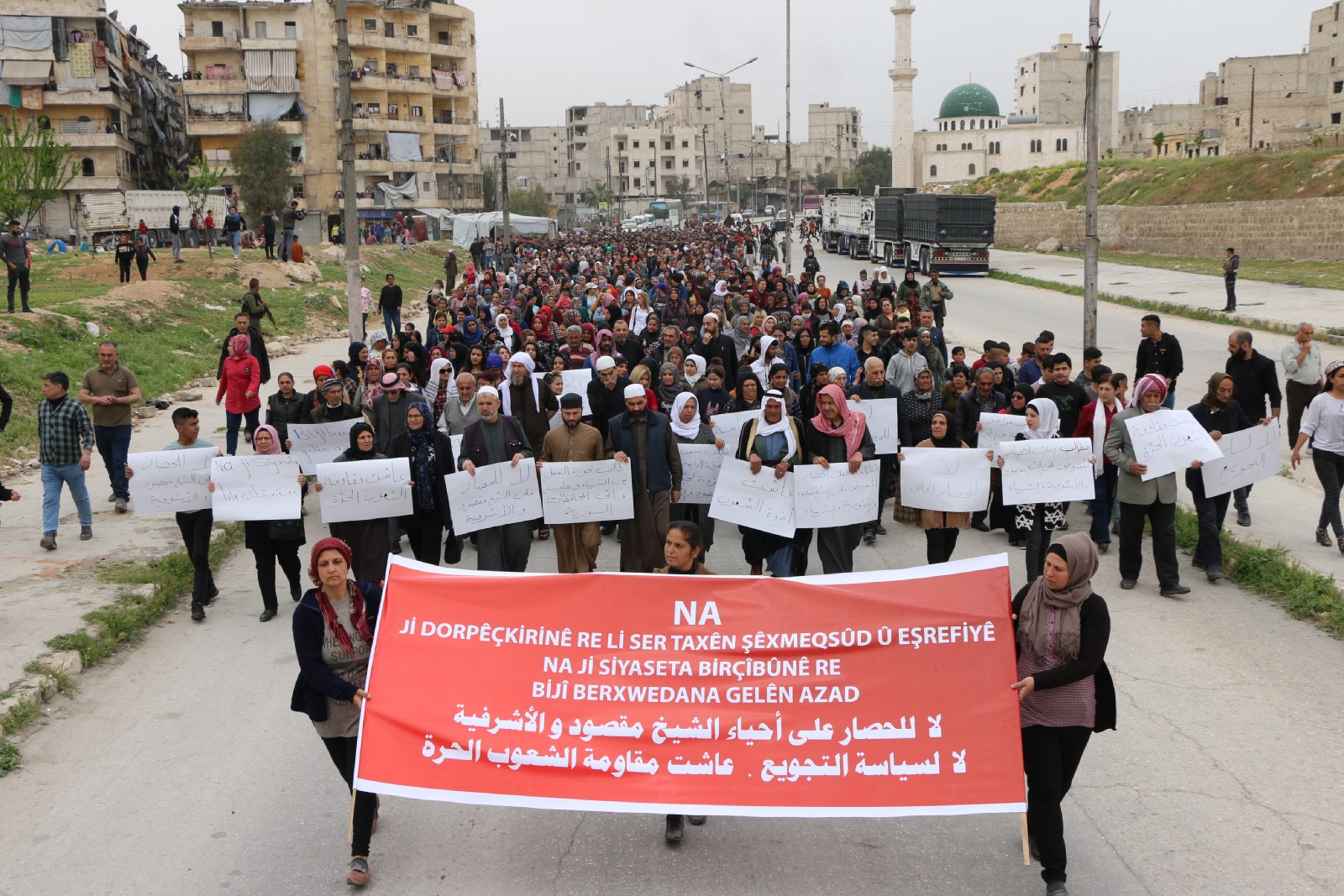 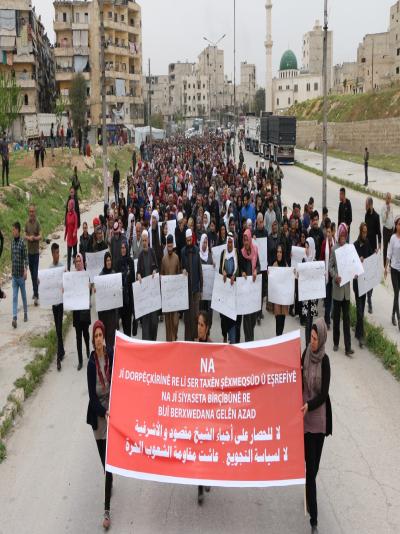 ​​​​​​​The Turkish army committed a new war crime against the people of NE Syr...