In the previous report, the defectors talked about the so-called "Peshmerga Roj", about the deception they were subjected to, and how the Turkish intelligence is the one that supervises these groups and moves them as it want, and about using the group to achieve partisan interests at the expense of the Kurdish people.

In this part, the dissidents od the so-called "Peshmerga Roj" also touch on the deceit they were subjected to, called on those who joined them not to be dragged behind the policies that serve the enemies of the Kurdish people, and demanded them to return to Rojava and defend it.

The displacement camps have turned into centers for recruiting young men within the so-called "Peshmerga Roj" after the Democratic Party prevented them from leaving the camp and working in Başûr Kurdistan, so the young men had no way but to join in exchange for money. 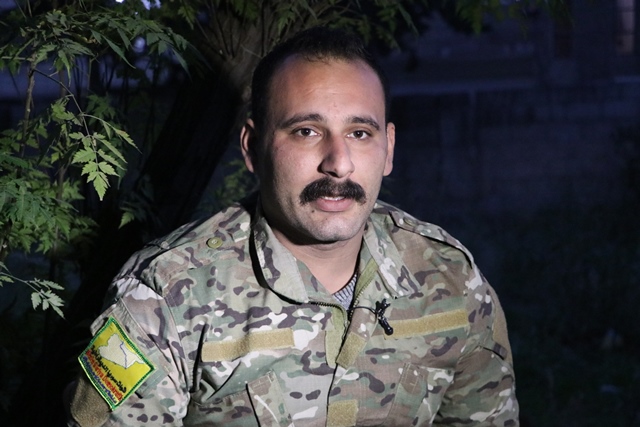 Aldar Omer Shibli, from al-Hasakah city, joined the so-called "Peshmerga Roj" in 2012 after his displacement to Başûr Kurdistan, when the authorities of the Kurdistan Democratic Party were encouraging young men and women to emigrate in the context of the policy of emptying the region of its population.

Aldar says that he was one of the young men who suffered from difficult financial conditions, so he accepted to join their ranks, pointing out that the camp administrators used to lure the young men in the camps with money in exchange for joining, in addition to claiming that they would send them to defend Rojava.

Aldar confirmed that he was a victim of false promotion there, and said: "The authorities used to promot that this group would go to Rojava to protect the Kurdish people."

The formation of the so-called "Peshmerga Roj" coincided with the beginning of Rojava Revolution and the establishment of the People Protection Units (YPG), that is, when the area was under major attacks by Jabhet al-Nusra and other mercenary factions, and the People and Women Protection Units remained steadfast in the face of those groups, repelled all attacks and liberated many areas.

Aldar confirmed that dozens of young men wanted to return to Rojava when Jabhet al-Nusra was launching attacks on the area, but the Kurdish National Council opposed the return of "Peshmerga Roj" to Rojava or joining the People Protection Units.

Media campaigns to distort the truth

He pointed out that the officers used to instill fear in the hearts of joiners by claiming that "SDF will arrest everyone who returns to Rojava," and this prevented the youths from returning to Rojava to defend it.

Aldar added: "The resistance of the Syrian Democratic Forces against ISIS mercenaries and their protection for our people in Rojava from terrorist groups created a kind of shame among the Peshmerga, the painful truth cannot be denied."

A special force to confront Kurds

During his speech, Aldar touched on the formation of a special force by the Turkish intelligence within the ranks of the so-called "Peshmerga Roj" and said: "The Turkish intelligence focused on training and strengthening personnel specialized in the 3rd Brigade "Hiza 3rd Brigade". The goal of these groups is to fight the Guerrilla in Başûr and the mountains of Kurdistan, as well as the Syrian Democratic Forces in north and east Syria."

After years within the so-called "Peshmerga Roj", Aldar Shibli returned to Rojava in 2018 after he realized the truth of this group and said: "After I realized the truth, I decided to return, and in 2018, I returned and joined the Syrian Democratic Forces."

Aldar Omer Shibli called on all members of the Peshmerga Roj and all those cooperating with the Turkish occupation to keep away from any scheme targeting the interests of the Kurdish people, return home and join the ranks of the Syrian Democratic Forces to protect their people.

Another victim of lies

Jankir Ahmed Taher from Qamishlo fled to Başûr Kurdistan at the beginning of 2012, joined the so-called "Peshmerga Roj" at the beginning of 2015, and like the others, Junkir was also deceived by the claim of the supervisors of this armed group that they would return to Rojava in order to fight the groups that target Kurdish people.

Jankir says in this context: "We joined the Peshmerga Roj on the basis of returning to Rojava, but that did not happen. We were only watching the attacks on Rojava on television."

Jankir received a 45-day military course, and confirmed that they had received the military training at the hands of the Turkish intelligence.

Jankir fought against ISIS mercenaries in the Mosul Dam, and was injured in Tax (Takh) village in Şengal province at the beginning of 2016, and added: "After my injury, the authorities abandoned me, and I had to treat myself on my own."

They told us you are our military wing !!

During his speech, Junkir touched on a meeting between the so-called "Peshmerga Roj" and the Kurdish National Council, and continued saying: "The leaders of the Kurdish National Council (ENKS) met with us, and they said that we represent their military wing, but the response was quick by the elements who expelled the Council's members and did not accept them. We joined the military force in order to liberate our areas, not to become members of a council that does not represent Kurds and follows its personal interests."

Turkey is the Kurds' enemy

Jankir indicated that they did not know at first that their supervisors were officers and Turkish intelligence, and he said: "But when the truth emerged, I decided to return to Rojava and join the Syrian Democratic Forces."

Jankir criticized sending the so-called "Peshmerga Roj" to the mountains of Kurdistan, and said: "It is sad to see the Peshmerga forces now heading towards the legitimate defense zones, where the Guerrila forces are present. We must know that Turkey is the enemy of the Kurdish people and the Peshmerga should not pursue the policies that serve the Kurds' enemy."

At the end of his speech, Jankir Ahmed appealed to the Peshmerga Roj members to return to their homes, and said: "You have to return to your sanity and your homeland. Money is no good. If the intention is money, then the authorities have also cut off your money."

Dozens of prisons have spread in Afrin canton after its occupation by the Turkish occupati...