So far, 87 mass graves have been identified, while only 34 have been opened.  As the anniversary of the massacre approaches, the Iraqi government opens some mass graves every year. It also organizes ceremonies for the martyrs of the Firman in order to escape its responsibility for Firman.

Recently, on the 28th of last June, excavation of six mass graves began in the village of Qena, southeast of Şengal.  In the presence of hundreds of relatives of the Ferman martyrs, who set up tents, waiting for the bones of their relatives and loved ones to be recovered.  Among them are two survivors.

Fawaz indicated that they left their village and headed to the village of Qena with the fleeing of the Iraqi army and the Kurdistan Democratic Party's Peshmerga from Şengal and its villages on August 3, 2014.

Turning to their confrontation with ISIS mercenaries, he said: "At 13:00 in the afternoon, an ISIS car came to us. They told us, 'There is no danger to you, no need to be afraid. We came because of the army and the Peshmerga, but you go to your homes.' Then they were followed by about 10-  12 of their cars, and about 35 armed men."

Fawaz mentioned that the name of the leader of that ISIS group was Abu Noura from Tal Afar, and continued, "They asked us if we were Yezidis or not. We answered them that there are only two families that are not Yezidis. They told these two families 'Get in your cars and leave', while they told us 'Go'  They gathered under that tree, while the women were in a different place."

After they gathered all the Yazidi men, they put them in three rows, about 80 men in number.  ISIS mercenaries took the eighty men to the site of the massacre, and after a phone call, ISIS leader Abu Noura started shooting them.  Meanwhile, three mercenaries were filming this shooting, while about 25 mercenaries were shooting.

Fawaz Ammo recalled the moments of the shooting, saying: "When they started shooting, I threw myself into the hole and the bodies fell on me. Those who were shot were falling on top of each other. I stayed under them and their blood was running on me. ISIS thought I was dead too. After the shooting, they  By examining the bodies and killing the injured who did not die yet. As for those who were healthy, they used to say to Abu Noura, 'This is alive, Abu Noura, come and kill him.' This is how they killed the survivors."

'Me and a friend of mine survived the mass grave'

After ISIS mercenaries made sure that no one was left alive, they left the area and took the Yazidi girls and women with them.  Fawaz Ammo recounted the story of his survival from the mass grave, saying: “They left after killing everyone. I came out of the mass grave and looked around, and found 37 people from my family including my father and my brother. 3-4 of my friends were injured and they were still talking. Two of them were in a condition  It was critical so they died inside the mass grave.One of those wounded was Ezdin Amin Hussain and he was covered in blood. I pulled him out of the cemetery with difficulty and we walked for about nine nights until we reached the shrine of Amadin."

According to the information provided by Fawaz, only nine people survived from that mass grave.  There are 69 names registered for the martyrs who were martyred in that mass grave.  But it is said that at least a hundred people were killed by order of the Emir of ISIS mercenaries in that massacre, including three or four children.

'Every child who could hold a gun was being killed'

Ezdin Amin Hussein Siddiq Fawaz, who together survived the mass massacre, also told the story of the massacre itself.  Speaking about the killing of Yazidi children, Ezdin Hussein highlighted the brutality of ISIS and said: "When ISIS mercenaries came, they did not distinguish between anyone, they gathered us all and separated the women and men. They were looking at the children and killing those who could carry weapons with the men."

On the reason for the gathering of hundreds of Yazidis in the village of Qena, Ezdin Hussein said: "The mountains were close, if we went, we would have survived, but this area was abundant with water, and if we left it, we would die of thirst." 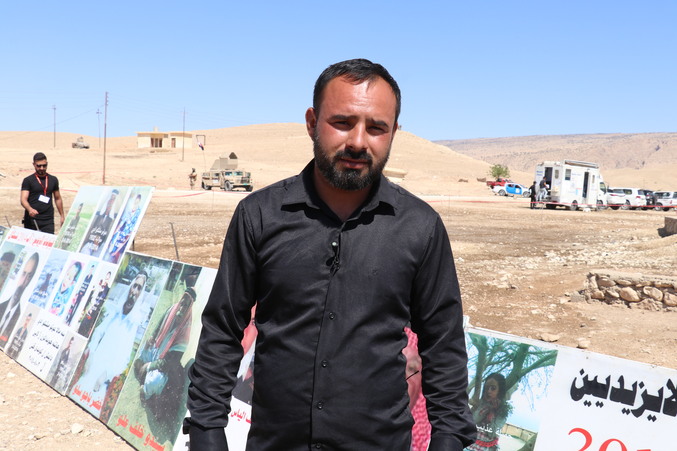 Ezdin Amin, who remained among the corpses during the shooting, commented on his survival story, saying, "The bullet hit my forehead, and my head was under someone else's. The hardest thing was that we got out from under the corpses, everyone was dead, and as a result of the lack of water, I drank blood from my forehead until I survived."

Their demands are not answered

After Fawaz and Ezdin finished telling the story of the massacre, we asked them about their message and demands. In this context, Fawaz Ammo told us: "Our demands are not difficult, but this is if there is a government that adopts it. We hope that all mass graves will be opened.  Everything. We came from the camps of Başûr Kurdistan, we set up our tents over the mass massacres, and we live on top of the mass massacres."

For his part, Ezdin Hussein said that he no longer trusted words and messages, and concluded his speech by saying, "We do not know what message we should send, we have been sending messages for eight years, but it is useless. It is now similar to opening the wound again, so how would the situation be if you  To open the wound again? We don't have any rights."

PKK`s Executive Committee called on Kurdish youth to: “Avenge Rezan Cawid and all of Kurdi...

Gerila TV released the footage from action carried out within the framework of the Revolutio...

The HPG confirmed the killing of 10 soldiers, the wounding of two of the occupation army, ...