The condolence telegram published by the SDC on its official website and stated the following:

With great regret, we have received the news of passing of the Syrian opposition writer and thinker, Hassan Abbas, on Sunday in Dubai.

He was an elitist face of the democratic opposition, the most prominent activist in the civil-cultural movement, and a passion for issues of citizenship, justice, fundamental freedoms and democracy. 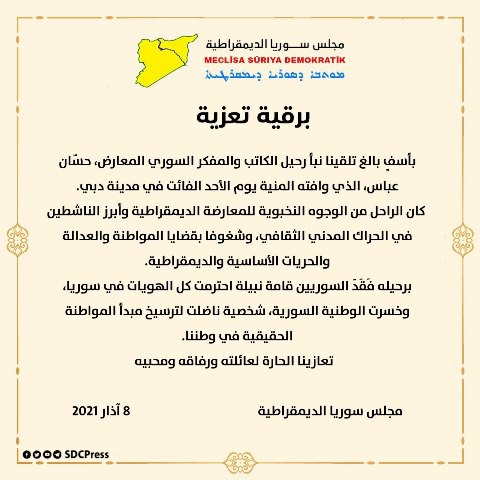 With his passing, the Syrians lost a noble that respected all identities in Syria, and the Syrian patriotism, a figure who fought to establish the principle of true citizenship in our homeland.

Our deep condolences to his family, companions and loved ones. "

Syrian journalists, activists and intellectuals mourned the Syrian opposition writer and thinker, Hassan Abbas, who passed away on Sunday in Dubai from cancer, at the age of 66.

Abbas is considered one of the most prominent elitist faces of the opposition before and after the revolution, and has played a role in the cultural civil movement since the 1990s, and participated in the Damascus Spring forums, was one of the founders of the Cultural Forum, and participated in the founding of the Syrian Association for Citizenship and the Human Rights Association in Syria.

This evening, a drone belonging to the Turkish occupation army crushed in the village of Ben...

The new president of the Libyan Presidential Council, Mohamed Al-Menfi, confirmed during his...

Russian troops returned to their positions that they evacuated yesterday, a day after being ...
Old Website