Hundreds of people from Tel Koçer district participated in a demonstration against the crimes of the Turkish occupation in the areas of legitimate defense and the regions of northeastern Syria.

The people who gathered in the middle of the district carried banners saying "No to the new Ottoman occupation in northern Iraq, Libya and Syria,” and “with our unity we will defeat conspiracies against the people.”

The demonstrators roamed the main street of the district amid chanting slogans that decry the crimes of the occupation and calling for an escalation of the struggle and the strengthening of the unity of peoples.

The demonstrators gathered in the middle of the side, where citizen Aasan Al-Abdullah gave a speech on behalf of the people, in which he said: “We send two messages, one to the local public opinion and the other to the international public opinion, we say to the local opinion, do you not know the truth of the fascist Turkish state? The bloody scenes still have effects until now, and what they have done to the liberals and patriots, we tell you that Turkey's attacks and plans are not only targeting the Kurdish people but all the peoples of the Middle East.

As we say to the public opinion that closes its eyes and closes its ears and mouth, we remain and continue to resist the approach of leader Abdullah Ocalan in addressing the attacks that we are being subjected to, and we appeal to all the freedom-seekers in the world to stand in the resistance line against the Turkish state’s plans. Are there Kurds in Libya, and do the Democratic Union and the Kurds exist in Egypt? Are there Kurds in Yemen? We say no, but Turkey’s plans aim to exterminate the world and spread wars in it.

The demonstration ended with slogans calling for unity and cohesion against the plans of the Turkish occupation.

Hundreds of the people of Al-Shaddadi and representatives of civil institutions went out in a demonstration denouncing the practices of the Turkish occupation and its mercenaries in northern and eastern Syria, and to confirm their refusal of any Turkish presence in the region.

The demonstration, which was organized by the district council, started in front of the council headquarters, and went to the Gibsa square, amid chanting slogans condemning the crimes of the Turkish occupation in northern and eastern Syria and its interference in Iraq and Libya.

The demonstrators carried pictures of the martyrs and the flags of the Syrian Democratic Forces and banners denouncing the policies of the Turkish occupation, amid chanting slogans that glorify martyrdom and martyrs and salute the spirit of resistance in prisons.

Upon the arrival of the demonstrators at the plaster point, the end of the demonstration, everyone stopped for a minute of silence, after which the administrator in the Democratic Union Party Mustafa Al-Ali, delivered a speech in which he praised the role of the brotherhood of the peoples in the region in defeating the mercenaries who tried to undermine the region's gains.

Al-Ali pointed out that the resistance shown by the peoples of northern and eastern Syria against all terrorist forces and mercenary groups, led by the Turkish occupation, will chart the future for future generations.

At the end of his speech, Al-Ali stressed that the peoples of the region reject all forms of Turkish occupation and its mercenaries in the region, and will support the Syrian Democratic Forces until they defeat all mercenary groups and liberate the region.

The demonstration ended with chanting slogans reviving the spirit of resistance and calling for an end to Turkey's barbaric policies. 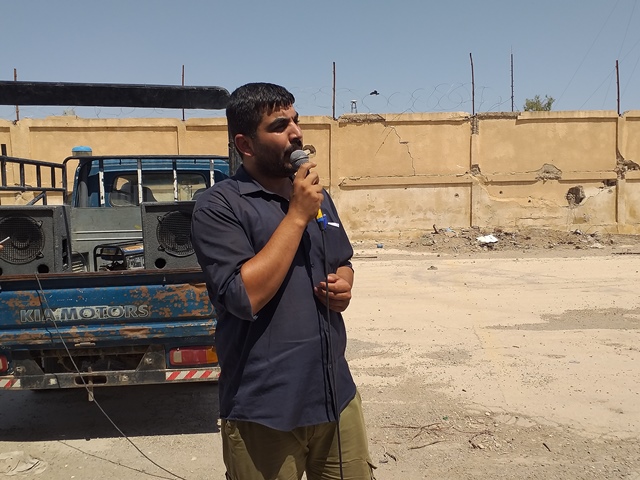 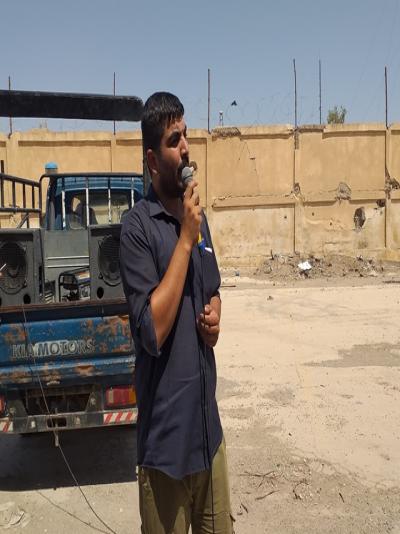 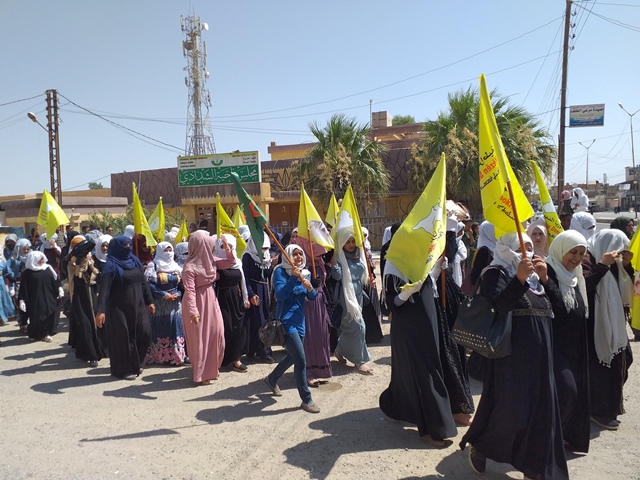 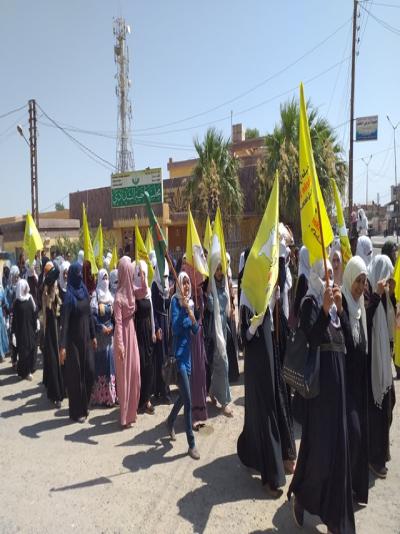 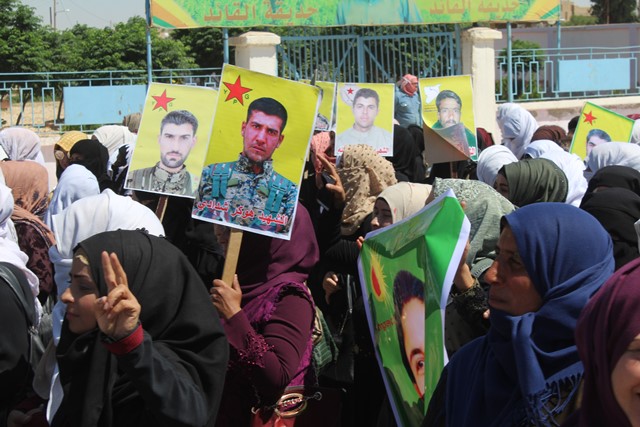 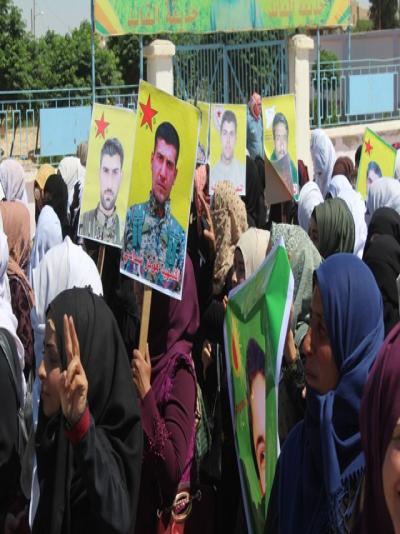 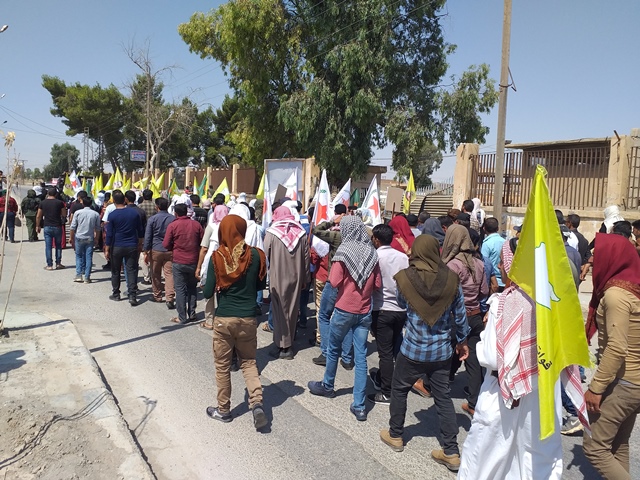 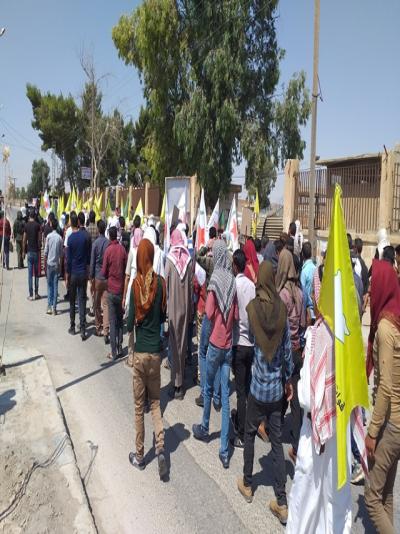 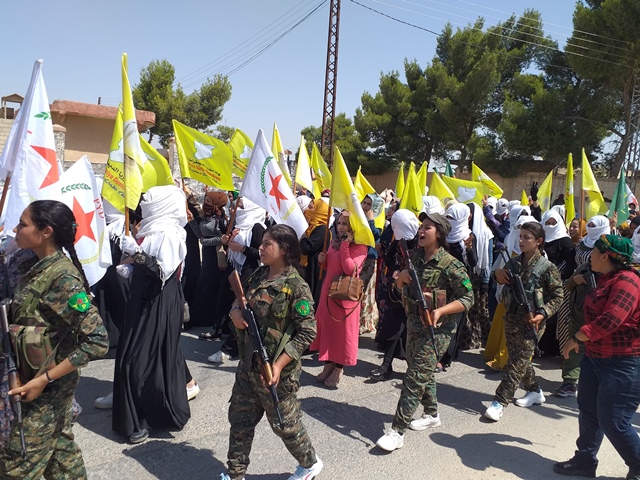 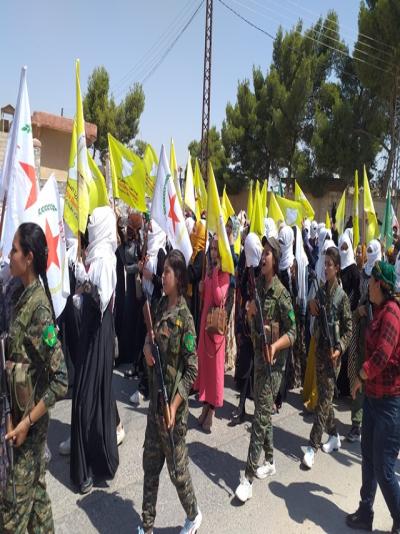 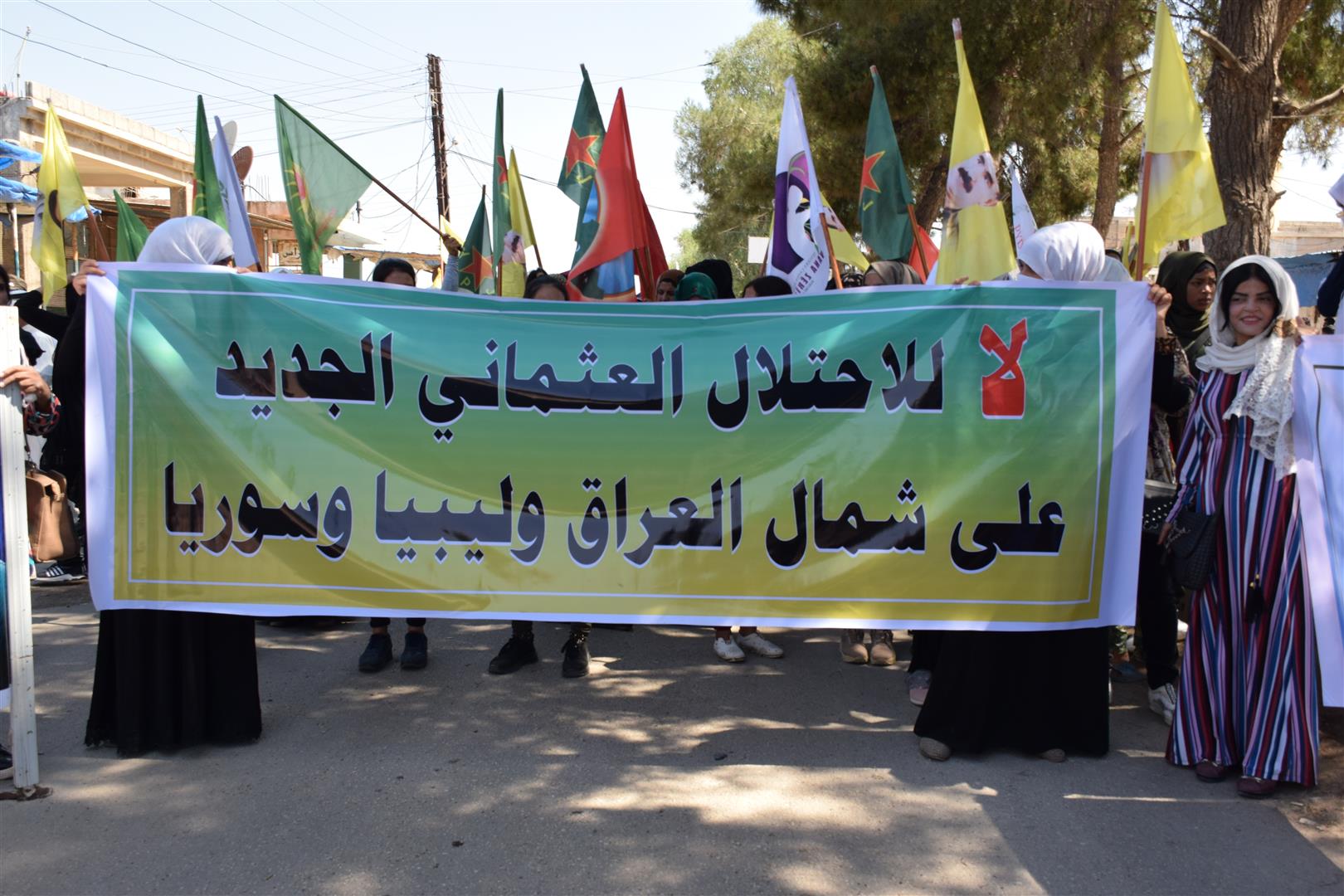 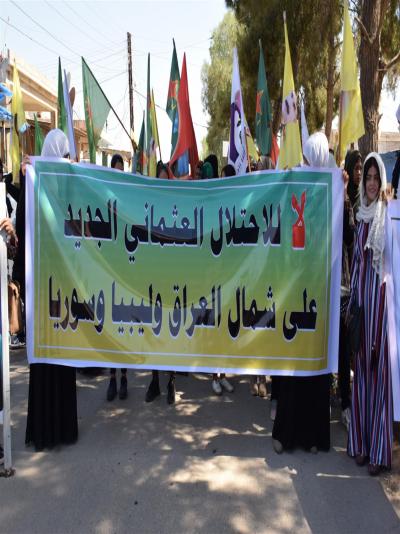 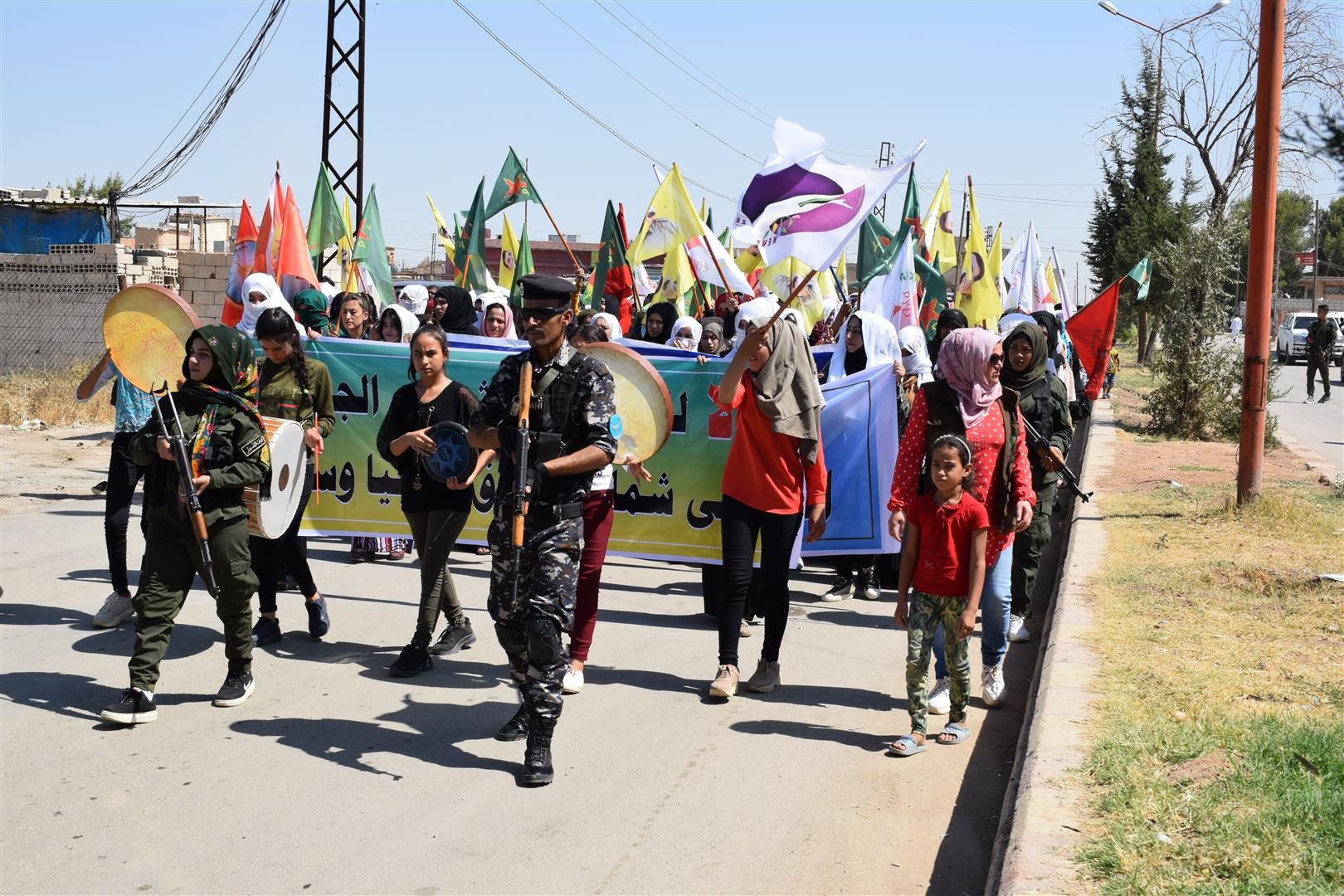 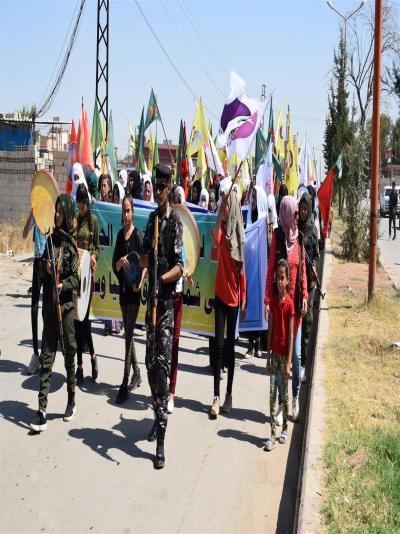 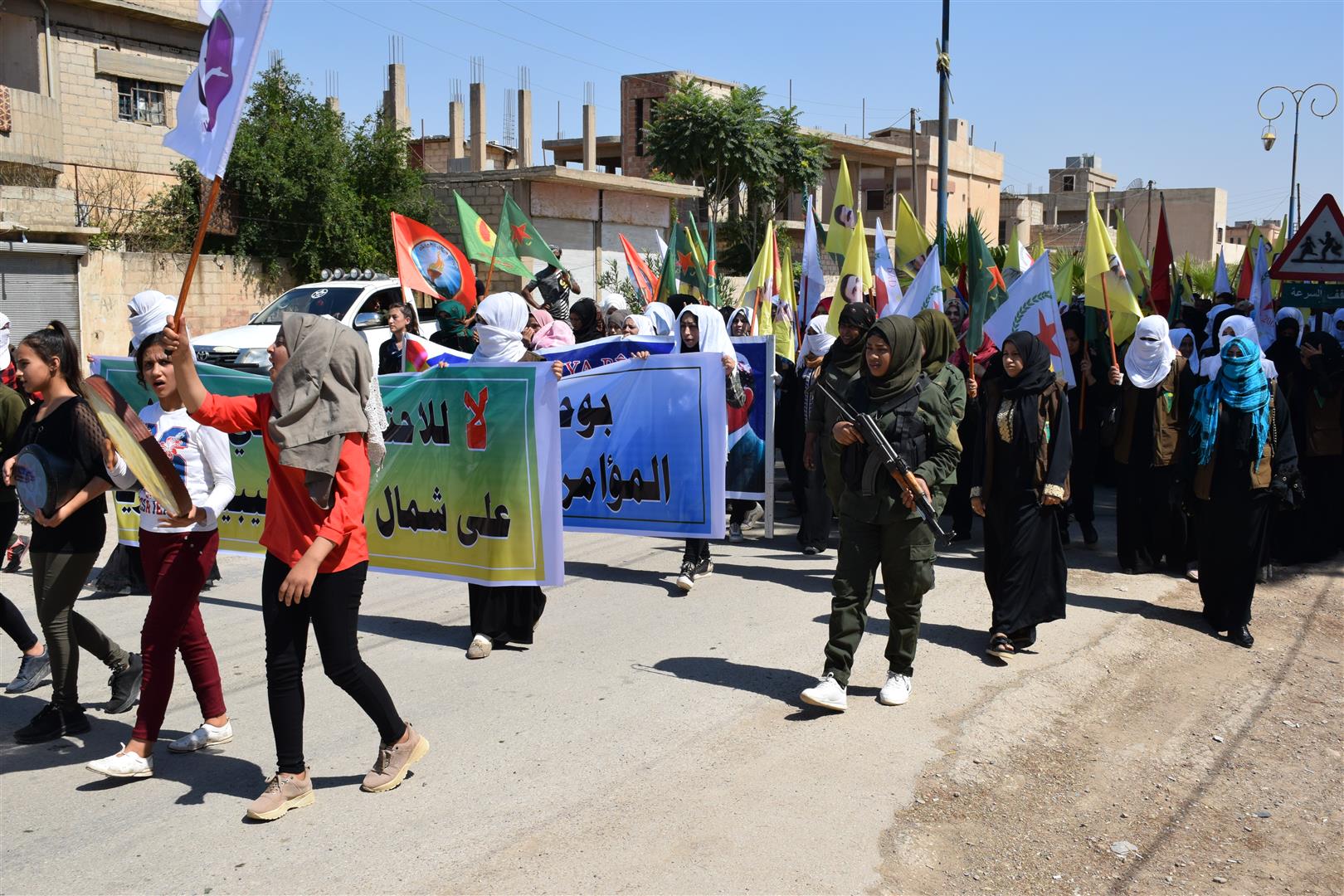 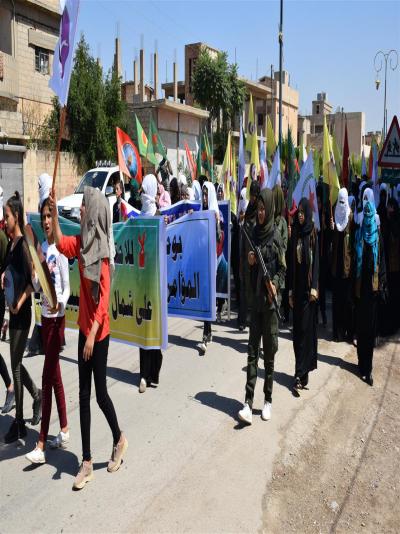 Normal life began to gradually return to the eastern countryside of the city of Deir-ez-Zor,...

The number of coronavirus cases in the regions of northern and eastern Syria increased to 10...

ISF arrested on the agent, who was recruited by Turkish Intelligence MIT and was sent to the...
Old Website