Çiya Kurd: Russia did not ask us to hand over Ain Issa, Turkey uses opportunities to expand occupation 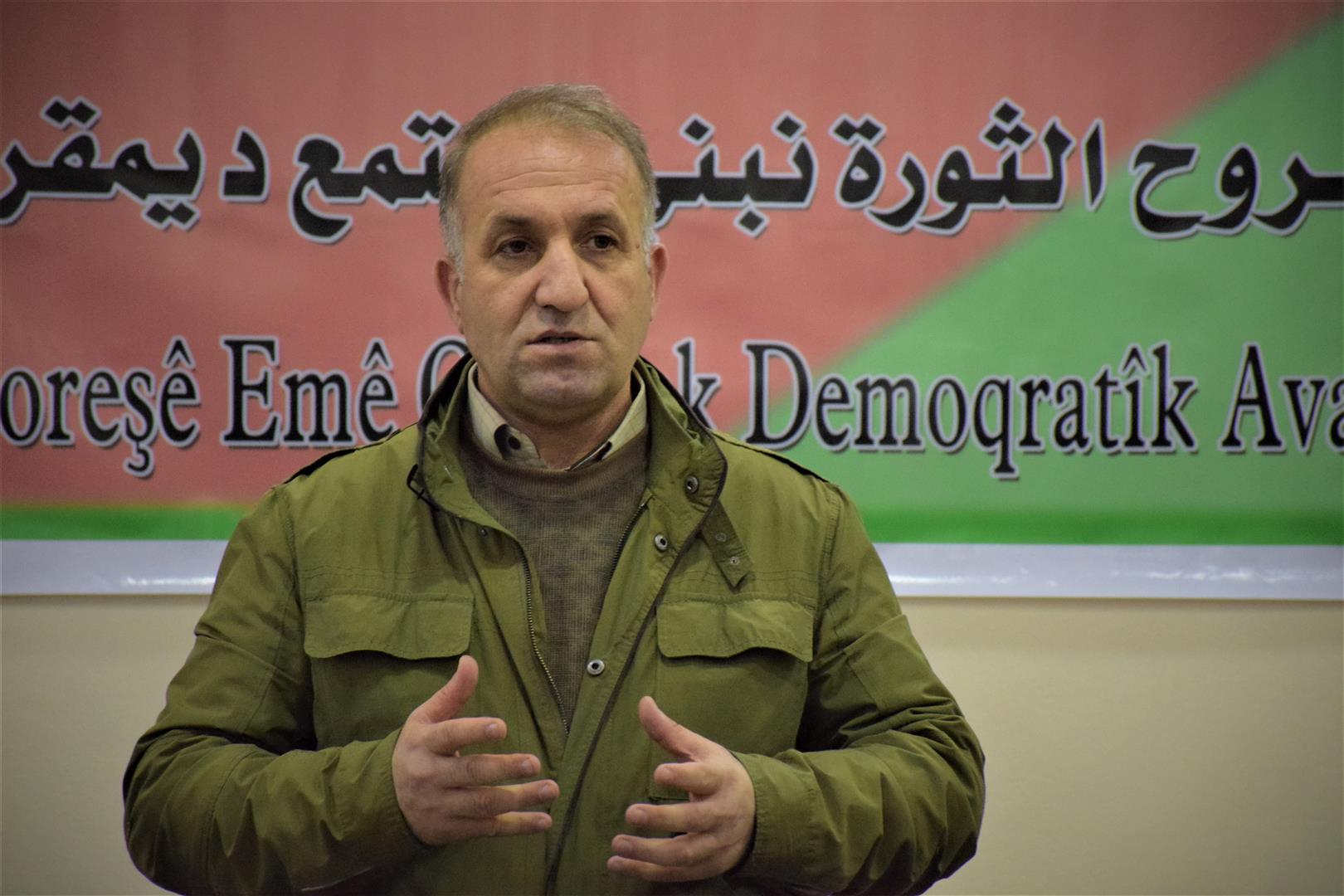 Badran Çiya Kurd refuted the news about a Russian request from the Autonomous Administration to hand over Ain Issa and its departments to the Syrian government, and emphasized that Turkey is using the transitional period of the American authority to expand its occupation, noting that any new Turkish attack will have catastrophic repercussions, as terrorism will revive in the world again.

The Vice President of the Autonomous Administration of North and East Syria Badran Çiya Kurd spoke in an exclusive interview with Hawar News Agency, commenting on the latest developments in northern and eastern Syria.

The dialogue came as follows:

* What are Turkey’s objectives to intensify its recent attacks on the region?

For a while, the Turkish state has been harboring its occupation intentions, and is constantly striving to expand the areas it occupies in Syria, as the control scheme on the M4 international highway is one of the main goals that Turkey has been seeking, since its last attack on the areas of Serêkaniyê / Ras al-Ain and Gire Spi / Tal Abyad, in addition to imposing a siege on Kobani, as well as controlling some areas and villages in the outskirts of Ain Issa and Tal Tamer, and the recent developments in these areas are only a continuation of those plans.

If the appropriate conditions are provided, and Turkey gets the green light from Russia and the United States, it will not hesitate for a moment to complete this great and dangerous plan.

* Has Russia really requested handing over Ain Issa to Syrian government? What is going on right there?

Recently, there has been a lot of talk about a Russian request from the Autonomous Administration to hand over Ain Issa areas and official departments there to the regime, and we confirm that this news is groundless; what is happening there, currently, is the coordinated move between the SDF and the Russian forces within the joint mechanism established during the Turkish aggression on Serekaniye and Gire Spi to fill the loopholes that Turkey’s mercenaries and forces exploit to ward off any dangers, and to limit Turkish arguments.

Do you not see the possibility of a new deal between Russia and Turkey for the Turkish incursion into other regions?

Until now, we have not touched any Russian-Turkish understanding about further Turkish incursion into the region, but if the deterrent position by Russia does not develop, we will understand from this that there is a hidden understanding between the two parties, so we hope that Russia will not continue or stand by by virtue of its sponsorship of the understanding in This region, and its main role in the form of agreement and understanding.

* It is noticeable that Russia has been silent recently about the Turkish attacks!

The continuation of silence raises some concerns, as there must be a Russian stance for the sake of stability in this region, and we hope that the Russian position will be clear in this regard, given the importance of the Russian role in limiting and curbing the Turkish reign, and Russia must play its role in the face of these attacks other than making justifications for Turkey, which targets populated areas and villages, and pledges to perpetuate the agreement that was signed in Sochi on 10/23 of last year with it.

* What about the US position, does it not also have a responsibility to rein in Turkey, as it is one of the guarantors as well?

Yes, America is also responsible, and the agreement that took place on 10/17/2019 between it and Turkey must be practically translated, which also stipulated limiting the Turkish role and the ceasefire.

Turkey's failure to abide by these agreements is a disregard for the will of the great powers, and this is what gives it an impetus to threaten the security of Europe and the region, send extremists to conflict areas, as well as carry out terrorist acts in Central Europe after each direct threat.

America and Russia must do their part to consecrate the reality of the agreement that happened with Turkey and the actual implementation of the ceasefire, and if Turkey senses a lack of action by these two countries, it will expand its occupation and ISIS movement will increase through its cells whose activities were monitored after the recent Turkish attack, as these cells took advantage of that and received a great moral boost.

* Do you see that Turkey's attacks at this time are related to the current vacuum in American power?

Of course, Turkey is taking advantage of the transitional period in America and wants to take advantage of it to create crises, support terrorism and expand its occupation, so it poses a threat to everyone in the region, and there must be clear pressure on it in this area, in light of the clear differences between it and all the active forces in Syria, we do not want to overlook these differences when our regions are the scene of Turkish attack and intolerance, these areas that achieved a historic victory over ISIS, and contributed to securing Syria, the region, and even the world from its last danger.

* Why do you think Turkey seeks to create all this chaos, especially with Europe?

Today, Turkey is working to create and develop crises, from Karabakh to Libya, through the Mediterranean, to Syria and Iraq, and most recently in Kashmir and China, where it creates chaos and wants to repeat that in all the places it reaches, including Syria and the regional and even European and global surroundings, it is the policy of chaos and the development of crises, and this requires that there be stances from the international community and all the active states in Syria and the world at large.

* If northern and eastern Syria is exposed to a new attack, what are its regional and global repercussions?

We affirm that if our regions are subjected to any attack, it will have repercussions on the whole of Syria, the region and the world, such as the development of terrorist operations in Europe after its occupation of Serekaniye and Tal Abyad, and we believe that our people and their military forces represented by the Syrian Democratic Forces will fulfill their duty in legitimate defense.