Fawza Youssef: Lausanne paved of nation-state, turned into grinding mills of its people 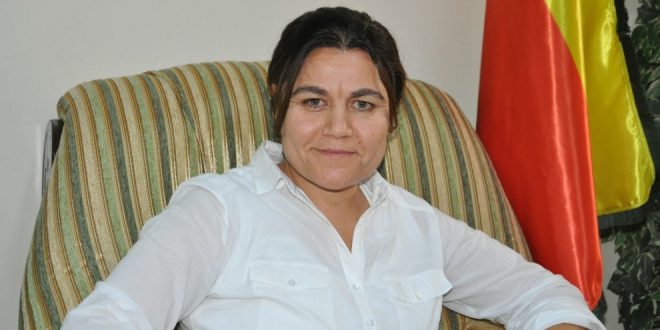 Fawza Youssef said it was the Lausanne Convention that paved the way for the nation-states in the region "So, there is a need for a new order and a new concept where the people would get rid of the enmity state for each other and could have changed to peaceful identities, so it is the advent of a democratic nation and a decentralized state that can save the region from the sterile cycle of war we are experiencing.

Hawar news agency (ANHA) held an interview with the Co-chair of the Executive Body of North Syria Federation Fawza Yousef said, "On the Treaty of Lausanne and its results, and its impact on the people of Turkey and the reality of Kurdistan and the role of popular movement.

The following is the text of the interview…

What are circumstances that led to the conclusion of the Lausanne Convention after World War II?

Due to political, social, cultural and economic collapse of the Ottoman Empire, which was then called the sick man, it was unable to win the First World War after being exposed along with its allies to defeat. The victorious countries then imposed their conditions and divided the Ottoman legacy first in the Treaty of Sèvres, and then Lausanne, the Treaty of Sèvres was not accepted by the Turks, which gave the right of independence to all the peoples that were under the control of the Ottoman Empire, which was evaluated by Kemal Ataturk as a death sentence for them, so they did not accept the terms, as the formation of a joint force of the Turks and Kurds to liberate the areas that were then seized by the victorious countries, to call them the war of liberation, and persuaded the Kurds then that there will be recognition of the Kurds and will be part of the Republic of Turkey, war restored control of many areas. Here, these states reconsidered the Treaty of Sèvres and worked to hold a new agreement in order to stop the strong counterattack by the Turks and Kurds under the leadership of Kamal Ataturk. As well as fear of the possibility of an agreement between Ataturk and the Soviet Union, which began to develop then, and to be able to control the events so as not to aggravate more and act against them.

Treaty of Sèvres, which was not originally implemented, was suspended in order to conclude the Lausanne Convention on July 23, 1923. This agreement has many provisions, but what is important here is that nothing is mentioned about the Kurds, and only a few general articles have been put in place that emphasize that all citizens in Turkey will be protected regardless of nationality, culture or nationality. It is also freely available without any difference. All promises made to the Kurds went with the wind, to be followed by the start of the denial of Kurdish identity and work to culturally and physically exterminate the Kurds and these practices continue to this day.

How do you evaluate the outcome of this agreement in light of Turkish failure after 95 years?

In my view, the outcome of this agreement was disastrous for Turkey, because it has not lived in stability until now, and since then it has been a state of coups, because the name of the Republic has remained just ink on paper and the republican system has not been taken into account. On the contrary, a national state has been formed that denies all identities and imposes the Turkish identity on everything. There is also constant conflict between the state and the components, between the state and the beliefs. The most horrible massacres in the past 95 years were perpetrated against the Kurdish people, against the Alawites, even against the uncooperative Turks. The Turkish state’s history was not a peaceful one, contrarily, it is a history of massacres, and permanent war with the Turkish people and with other peoples by white Turks, Turks who monopolize everything, including power, authority and money; thus, the Turkish state is suffering repercussions of clinging to its policy and proceeding with it!

How did this agreement affect the reality of Kurdistan and the role of popular movement in the failure of this convention, especially the democratic nation?

This agreement was the legitimate recognition of keeping the Kurds out of the political map. It can be said that this agreement between the Turkish Republic and the British Empire led to the most dangerous agreement of demarcation of the border between Turkey and Iraq. This led to the rupture of the body of Kurdistan. Of course, this agreement was not specified in the political arena only, but it was only assassination decision, where both Russia and England  agreed with the colonial countries against  Kurdistan to eradicate the movements of the Kurds, as was done in the movement of Simko where Turkey and England with the help of the Shah of Iran aimed to eradicate it, as well as the movement of Mahmud Barzanji in southern Kurdistan, where it was liquidated.

Of course, today we are living in conditions similar to this period where there is a new divisional war in the region and the laws of the Treaty of Lausanne are still applicable to four parts of Kurdistan. We as a Kurd must read this period well and draw lessons so as not to live the same tragedy. Our people in north Kurdistan or in south Kurdistan are deluded to think that only a party is targeted, but this is a grave mistake. We should know that targeting any part is targeting other parts too. Historical awareness is very important and if we study the situation of the movements after the First World War, and how the Allied States would work to eradicate them, we will know well the fact is what we live today.

What Turkey is practicing today against the policies of Syria and Iraq, which is mentioned as a revival of the National Oath. In your opinion, is Turkey today seeking through the developments and conflicts in the region to regain what it lost in this agreement? How can the Kurdish people foil such agreements?

Turkey dreams of re-establishing the glory of the Ottoman Empire, and tries to restore the borders of the National Oath, but international conditions do not allow this and the existing balances are not appropriate to achieve this, but this does not mean that Turkey has abandoned its dream, and its attempts in Syria and Iraq are confirmation of this.

We must organize our society well in all respects and not only rely on agreements that can be changed according to interests, so that the Kurds and other peoples can work together to establish peaceful co-existence and also work towards developing common strategies against such agreements that target our future as the relationship between peoples and ingredients are very fateful.

Not to neglect the principle of legitimate defense and the organization and preparation of this force constantly, since there is no constitutional and international guarantees or political settlement, and of course other materials can be added, but these are the fundamentals I believe.

Internal Security Forces: Turkish occupation has been shelling border villages since this morning