​​​​​​​Hasso: Parties supervised on Şengal agreement seek to commit, the 74 massacre against Yazidis 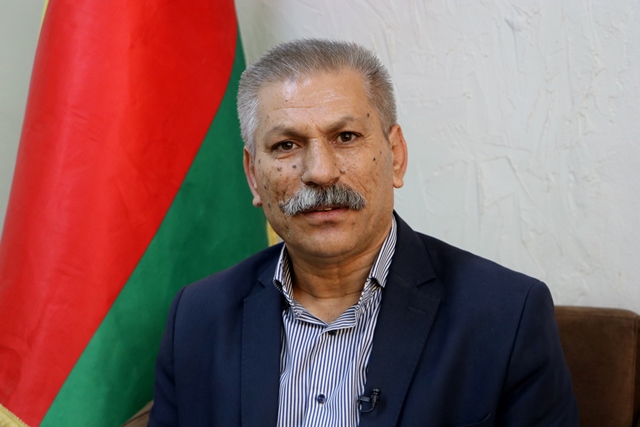 On October 9, the government of Baghdad and the Kurdistan Democratic Party concluded an agreement regarding Şengal, without referring to Şengal Council, the Autonomous Administration, or the Şengal Protection Units that defended Şengal.

The co-chair of the Democratic Society Movement TEV-DEM, Gharib Hasso, explained in an interview with ANHA agency that Turkey took advantage of the current situation in Iraq and contributed to the signing of the recent agreement between Baghdad and Hewler under the supervision of the United Nations, "and this is a real disaster, because those in charge of this agreement are preparing to commit the 74 massacre against the Yazidis."

How do you see the agreement concluded between the governments of Baghdad and the KRG regarding Şengal?

It is far from the will of the Kurdish people and the will of the Yazidis, and there are forces other than Baghdad and Hewler behind this agreement, such as Turkey and America, under the supervision of the United Nations.

The Yazidis were subjected to 72 extermination (decree), and they did not find anyone beside them, and they were always subjected to extermination, there are massacres that killed more than 90,000 Yazidis and others more than 150,000 Yazidis, and in the 73 genocide the Kurdistan Freedom Movement sided with the Yazidis, if it had not been the Peoples' Defense Forces HPG , the People and Women Protection Units YPJ, YPG, the Yazidis would have been eradicated, and there was no need to conclude the new agreement.

The revival of ISIS and the recent agreement, and Al-Kazemi's agreement with America, about ending the existence of the armed factions and viewing the Yazidis as a faction similar to the Popular Mobilization Forces is illogical, because the Yazidis are an independent society recognized in the Iraqi constitution, and America must recognize the will of the Yazidis.

In your opinion, why does the KDP participate in such agreements?

The Kurdistan Democratic Party had to play a peaceful role, and discussions with the Yazidis Council, the Autonomous Administration and the people of Şengal had to be discussed to resolve the outstanding disputes, but unfortunately the party that withdrew from Şengal by a wrong and fatal tactical decision in 2014, is trying to interfere in the situation of Şengal, as it tried in March 2016 during He brought its forces to the Khansour region, and after that, a number of Şengal Protection Units and the Peoples' Defense Forces who liberated and defended Şengal against ISIS mercenaries were martyred.

What is the goal of the Kurdistan Democratic Party of the recent agreement?

The regime that suffers from political, military, economic or social crises always tries to export its crisis abroad, and this is what the Turkish state does, as the Justice and Development Party and the Nationalist Movement Party have agreed and they are committing the most horrific crimes inside Turkey, so Turkey is now interfering in neighboring countries Like Syria, Iraq, and Libya, the Kurdistan Democratic Party was trained by the Justice and Development Party and is following the same approach and trying to export its worsening crisis for decades to outside the region through the recent agreement.

The Kurdistan region is suffering from a real crisis, and has been under attack for decades, so whenever Turkey desires to launch attacks against the people of Başûr, the economy of Başûr collapses, and the teachers and the Peshmerga do not receive their salaries, and there is a contradiction between the Kurdistan Democratic Party and other parties in Başûr, and everyone who comes out in the face of the Democratic Party he is being arrested because he is a family party.

Through the recent agreement, the Kurdistan Democratic Party is trying to cover up what was mentioned above, as it would like through the agreement to improve its image, and say here we want to return to Şengal, but they do not allow us to do so, and the party is trying to incite its incubator against the Kurdistan Freedom Movement, the democratic will, and the will of the Yazidi community, meaning that it It follows the same as Erdogan, who incited the Turkish community against the international community.

The line connecting Jalawla and Saadia to Şengal is under the control of the Iraqi forces, so why does the party not demand to return there, and to Kirkuk, Mosul and Zammar?

The goal of the KDP is to undermine the will of the Yazidi community, which defended its existence, protected itself, organized its ranks, and developed its relations with the neighborhood.

Turkey took advantage of the current situation in Iraq and contributed to the signing of the recent agreement between Baghdad and Hewler, under the supervision of the United Nations, and this is a real disaster, because those in charge of this agreement are preparing to commit the 74 massacre against the Yazidis.

I would like to refer here to what is being circulated now about the presence of 5,000 ISIS mercenaries, who are now being trained in Bashiqa camp, who are being protected by the United Nations, America, the Iraqi government and the Kurdistan Democratic Party.

What is required of the Kurdish and Kurdish people and forces now?

There are some shy attitudes emanating from some Kurdish and Kurdistan forces, and we are Kurds, whether we are Yazidis, Muslims, Kakai, Shabakis or Alawites, there are constant attacks against us, and the silence of Kurdish forces increases these attacks, so we must break our silence, and the Kurdish parties must meet and discuss the risks facing the Kurdish people.

Today we see that delegations from the Şengal Council and Şengal women visit Baghdad to discuss the reasons for the signed agreement, but unfortunately we did not see Kurdish parties or forces that organized visits to Baghdad or to Başûr to discuss the agreement concluded in connection with Şengal.