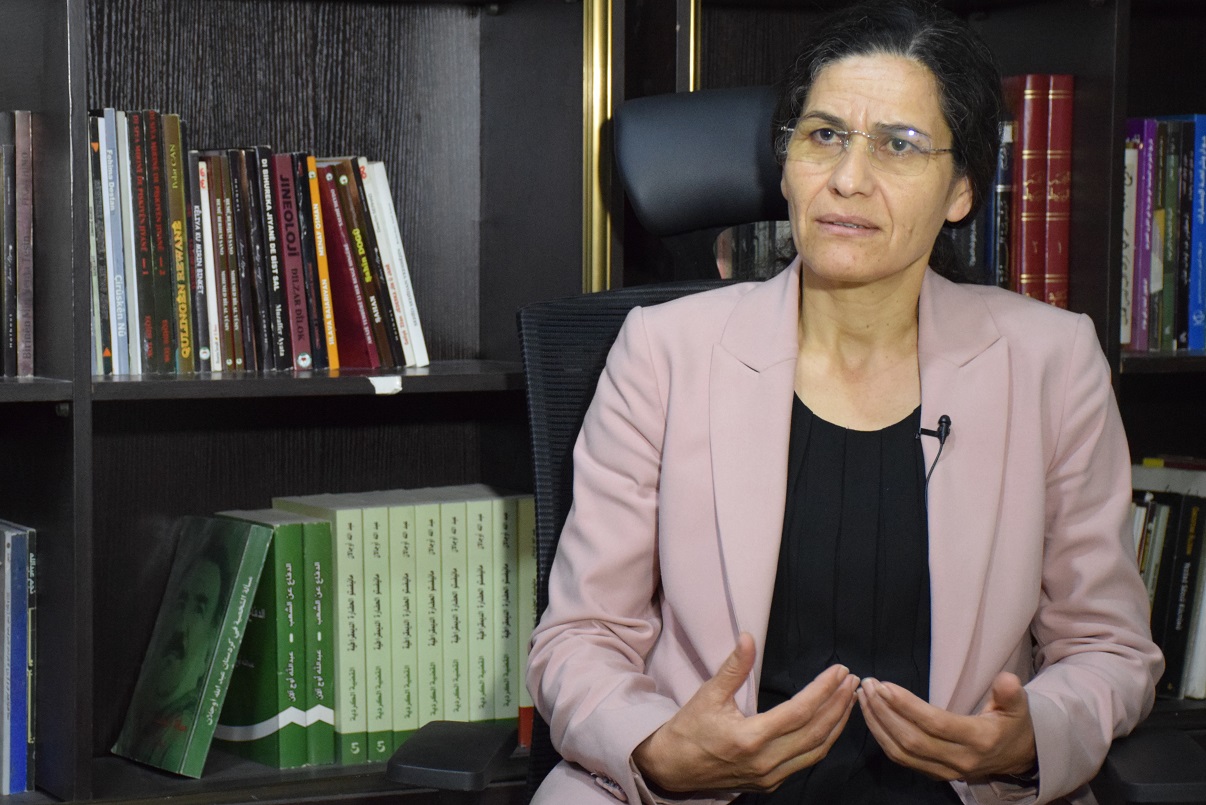 The Head of the Executive Council of the Syrian Democratic Council SDC, Ilham Ahmed, criticized the international community for not providing medical support to the areas of north and east of Syria to confront Coronavirus outbreak, and held the Syrian government responsible for not coordinating with Autonomous Administration in confrontation Coronavirus.

Despite the Urgent need of the areas in north and east of Syria, like other countries and cities around the world to medical devices that disclose emergence of Coived-19 in early time, but most the concerned parties are practicing the duplication against the residents of north and east of Syria under pretext dealing with governments on the top is the W.H.O, at the same time is sending medical devices and aids to the areas under domination of Turkish occupation in Syria.

On the repercussions of Coronavirus, the World Health Organization, the International Coalition, and Russia standing idly by in the north and east of Syria, and the actions being taken by the Syrian government and the Turkish occupation, Hawar news agency (ANHA) held a dialogue with the Head of the Executive Council of the Syrian Democratic Council SDC, Ilham Ahmed.

The text of the dialogue is as follows:

• W.H.O provided support to the Syrian government and the so-called Syrian coalition, what are the reasons for its failure to support northeastern Syria?

Unfortunately, the areas of Autonomous Administration are still deprived of all kinds of humanitarian support. The World Health Organization is existed here in the north and east of Syria, and it deals with AA's institutions, but the support provided to the region is still very simple, it is understood that this type of organization works officially with the central governments, and the decisions of these governments are taken into consideration, and we see that this mechanism of work is incorrect, given that the Syrian government has so far dealt with the issue of opposition, democracy and the process of change in a very negative way, and it is still insisting on the issue of centralization, and still insisting on all methods practiced against the opposition, so it is not reasonable for this organization to deal only with official governments.

We know that the World Health Organization has allocated of the Autonomous Administration with devices to detect infection with the Coronavirus, but it has not yet provided them to AA's areas even at a time when it provided a number of these devices to the Syrian government, and provided support to other faction areas, and this is considered a political decision, the inclusion of the humanitarian issue within the framework of decisions is a critical and incorrect topic, and the United Nations and the World Health Organization must review their decisions in this field, so that their work does not fall within the framework of political decisions issued by the central governments.

• You have contact with the International Coalition against ISIS, is there anyone who communicated about confronting the Corona pandemic, and is there support for Autonomous Administration in North and East of Syria?

• Russian forces are deployed in many areas of north and east Syria, is there any continuity to confront this pandemic, and whether any kind of support was provided to AA?

The Russian side also has not yet provided any kind of services, and all that can be provided to the Syrian regions is through the World Health Organization, as the Russian party is responsible for this aspect, especially in the areas where its military forces are deployed, as is well known, the military forces are the most vulnerable for the spread of this type of pandemic, and the Russian forces as we always know are involved with the regime and Iranian forces, and therefore there is a great risk, from the transmission of this pandemic through the Russian and regime forces to the region, and therefore it is necessary for the Russian government to take this issue into consideration and provide what can to do in order to save these areas from pandemic.

• Is there coordination between the Autonomous Administration and the Syrian regime to confront the pandemic in the north and east of Syria?

With the Syrian government, the AA is coordinating through the Health Body at the local level, but unfortunately until now there have been no results for this coordination process, because until now Damascus has not responded to the results of some samples that were sent from the region to Damascus, and the Health Body has not yet received any response to these samples, in addition to the flight movement, has not stopped yet. Several times, flights were taken off from Damascus to north and east of Syria, despite the many discussions to take measures to make medical examination all arrivals, and transfer them to a quarantine to protect the region, but the parties to the government are not responsive to these. The measures, yet have not assumed any kind of responsibility in this direction, and there are serious positions by the government may cause the deployment of the epidemic in these areas.

• What is the Syrian government seeking from its recent actions regarding precautionary AA's measures to confront the Coronavirus in the area.?

Unfortunately, many parties take this pandemic as a way to put pressure on the other side, which is an imperfect method, an improper method, and far from ethical conventions and norms, so it requires the Syrian government to take responsibility, considering that the residents of these areas are all Syrians, and they seek to end the Syrian conflict and the access of the Syrian people to safety, and it is necessary to move away from other methods, otherwise it bears the responsibility of intending to spread the pandemic in these areas.

• What we are witnessing in the absence of coordination to confront Corona, will it affect the future of negotiations between the two parties?

Healthy, it will affect the entire Syrian regions, and not only AA's areas, and what concerns the negotiations and their future, and what is the effect of the current stage on the future of those negotiations, there is not yet anything of any kind of negotiations, but it is just discussions, no more, no less, for that everyone interested in the health situation, and everyone should focus on this aspect.

• Turkey has recently been working to send mercenary families to Serêkaniyê and Tel-Abyed with news of its attempt to bring the infected into the area?

There is a lot of information obtained from those regions and we are still seeking to verify it, but the reality in Turkey itself is very tragic, every day there are hundreds of Turkish citizens buried in Istanbul and other Turkish cities, so using this method if the fact that they are transporting patients to these areas is considered another type of war that Turkey engages in facing the inhabitants of these areas, therefore we appeal to public opinion and the concerned authorities to explore this issue to find out its truth, otherwise there are serious risks that can be emerged as a result of Turkey's irresponsible actions in this field.

• What is your invitation to the people in north and east Syria at this stage?

On this point, I want to point out some cases that the health authorities wanted to verify from those who came from Damascus, in addition to the case of the soldier who came to al-Shahba area, where the family hided the subject, as if he had not yet arrived, such dangerous real behaviors come from the subconscious parents should not feel that in the event of being placed under quarantine as a prison or a detainee, on the contrary, this situation is necessary, and take it into consideration and adhere to it to protect the person first and society second and protect the family and loved ones third, and these measures are very important and necessary.

The state of emergency or curfew was necessary, and an important decision taken by AA as a precautionary measure to confront this pandemic, and gave a positive result in these areas and preventing the spread of this pandemic, from now on, this is necessary, just as the commitment to the curfew is necessary, we know that the people are affected by the curfew and this curfew will take place until the temperature rises in order to start easing the curfew and gradually lifting it.

We appeal to all residents in AA's areas to abide by these decisions until the atmosphere changes somewhat, and new decisions are issued by the administration and work is done according to them.