​​​​​​​Sheikh Baqi: Plot being hatched against Kurds with KDP's help 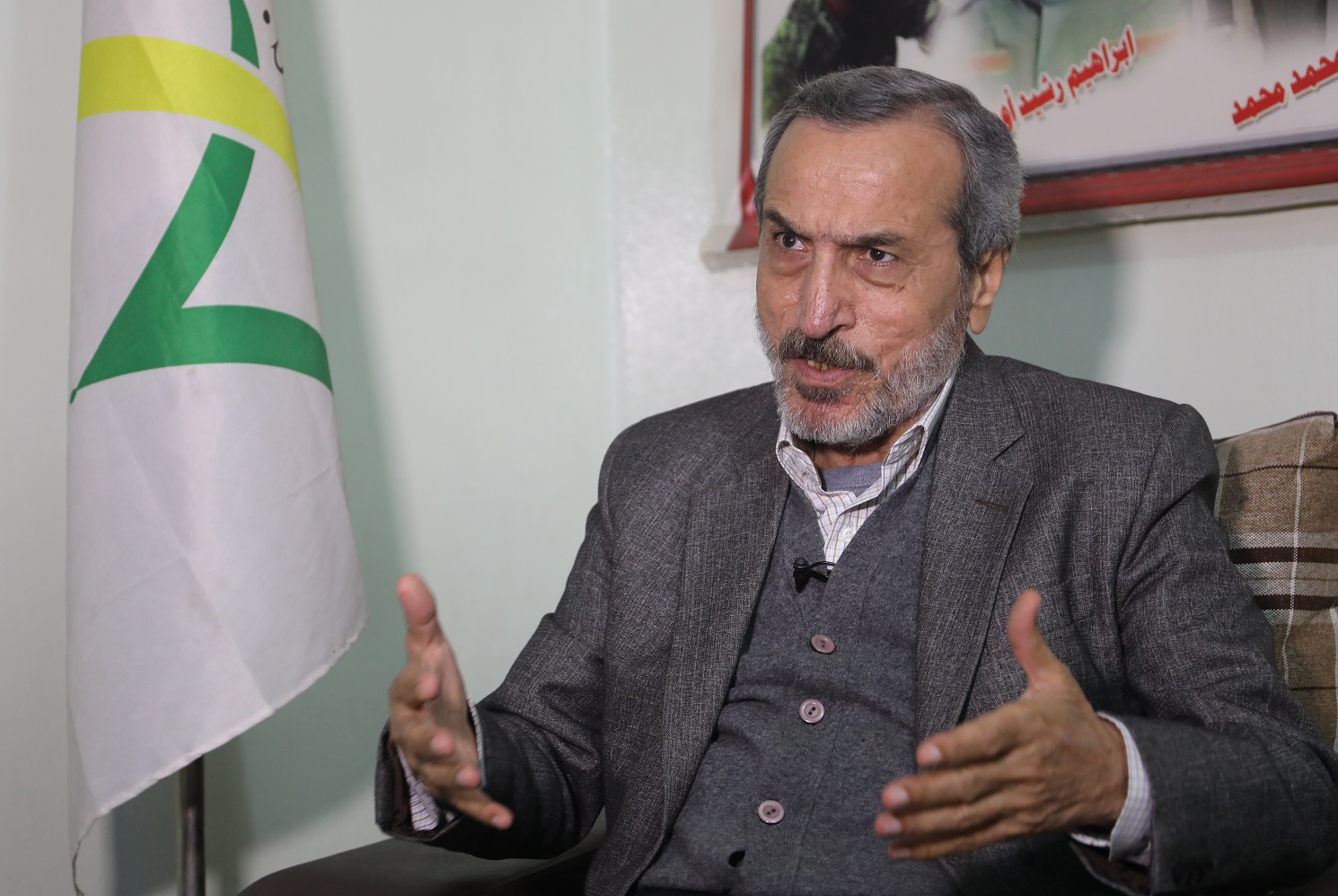 Jamal Sheikh Baqi explained that there is a major scheme targeting the achievements of the Kurds, especially in Rojava, and pointed out that the Kurdistan Democratic Party (KDP) commits a historic mistake by standing with the conspirators, and he said: "Some try to gamble with the gains and achievements made by the Kurds as if these gains are their personal property."The Secretary-General of the Syrian Kurdish Democratic Party (P.D.K.S) Jamal Sheikh Baqi referred to new developments and changes in the region after Turkey's occupation of Serêkaniyê and Girê Spî cities.

Regarding the recent developments in the region in general, and Başûr, Rojava in particular, our agency held a dialogue with the Secretary-General of the Syrian Kurdish Democratic Party (P.D.K.S) Jamal Sheikh Baqi.

The following is the text of the dialogue:

The region witnessed rapid developments, especially Rojava and Başûr Kurdistan, as the Kurdistan Democratic mobilized its forces in the legitimate defense zones, attacked the People's Defense Forces, and concluded an agreement with the Iraqi government, how do you evaluate these developments?

Since the outbreak of the Rojava Revolution on July 19th, 2012 and until now, no day passes without a new conspiracy being hatched by the enemy against the region, with the aim of eliminating the freedom of peoples, and the democratic project aimed at managing itself and working for the democratization of Syria in general.

All methods were used to obliterate the will of the people of the region through direct and indirect attacks and special warfare pursued by the enemy, through its proxies such as Jabhet al-Nusra, ISIS mercenaries and the so-called Free Army. After the failure of the proxies to eliminate the hopes of this people, the region was supported by the international coalition, and terrorism was broken.

After breaking terrorism in the region, the conspirators intervened directly to end the democratic project, and the beginning was Turkey's occupation of Jarablus and al-Bab cities, then it launched attacks on Afrin city to separate Rojava regions through an experienced international and regional conspiracy, against the background of a bargaining process between Russia and Turkey in addition to America and the West turning a blind eye to these attacks.

After Turkey occupied Afrin, with a much dirtier barter and with U.S. participation through Trump and Russia's policy, Turkey launched attacks on the cities of Girê Spî and Serêkaniyê, occupied them, and reached the outskirts of Ain Issa and Tel Tamr. Against the background of Turkish attacks in the region, the power relationships in the regions of north and east Syria have changed.

The International Coalition Forces were present in the area, but after the developments that took place, and Turkey's occupation of several areas in north and east Syria, the Russian forces and some of the regime forces entered the border areas, and these developments affected us, but with steadfastness, persistent and strong will, we managed to move forward in our democratic project and deal with the status quo with wisdom and rationality.

After the Turkish attacks on the region, and before the attacks on Heftanin region in the legitimate defense zones, Rojava and the regions of north and east Syria have entered a new phase.

You indicated that the region entered a new phase after the occupation of Serêkaniyê and Girê Spî, what do you mean and what is this stage?

The situation in north and east Syria began to be discussed in international forums, discussion is taking place on the future of the region and focused on how military alliances translated into political alliances, the work to prepare a ground for political changes, in addition to political recognition of the democratic project in the regions of north and east Syria. At that time, there was a contact with Kurdistan Region in order to soften relations that were tense, and in Rojava, a rapprochement occurred among the Kurdish forces that have been struggling for eight years among the population and the Kurdish forces that were abroad working on other countries' projects, and following the initiative of the Commander-in-Chief of the Syrian Democratic Forces, Mazloum Abdi, talks have started between both sides, and everyone understands how open we are to those talks, as we have made great strides in this area. I can say that we have reached the pre-end stage.

These developments did not satisfy Turkey, some local countries and forces. Suddenly, we witnessed the occurrence of accelerating events in the region, all of which were interlinked with each other and against our views and our democratic project.

Initially, the Kurdish-Kurdish talks were obstructed, and in conjunction with the obstruction of the talks, massive attacks were launched on the areas of the legitimate defense zones in Heftanin, and a plot was hatched against Şengal by the Turkish intelligence, via concluding an agreement between the Iraqi government and the Kurdistan Democratic Party, and the most dangerous of all is taking the so-called the Peshmerga Roj to the legitimate defense zones to launch attacks on the Guerrilla Forces, and here I would like to say which mentality the Democratic Party follows, does it really need those who number 2,000 or 3,000 people.

In your opinion, what is the purpose of the Kurdistan Democratic sending the so-called Peshmerga Roj to the legitimate defense zones?

The Kurdistan democratic taking the so-called Peshmerga Roj to the legitimate defense zones is a dangerous sabotage scheme whose repercussions are directly reflected on Rojava. What I would like to say is that the Democratic Party aims to create chaos in Rojava with this scheme.

We welcome any Kurdish force that supports our struggle and project. The Kurdistan National Patriotic Party in the last period supported us, especially in Kobane resistance, and the Kurdistan Freedom Movement did not hesitate for a moment to provide support.

How do you evaluate the recent statements issued by some KDP leaders regarding the People Protection Units and the Syrian Democratic Forces?

Let's talk in the language of reason, what will 50 or 60 fighters in the People Protection Units do in Başûr, these statements are very flawed and evidence of preparation for a major conspiracy, and this has been clear in the statements of  the Kurdistan Regional Government's Prime Minister Masrour Barzani who called on America not to support the Syrian Democratic Forces? What mentality does he adopt?

There is a major scheme that is being worked on against Rojava, and the spearhead of this scheme is the Turkish state and Russia that is trying to pressure the Autonomous Administration to concede to the Syrian regime, and Iran to pressure America, and the Kurdistan Democratic Party which has become a pawn in the hands of the Turkish state that has established dozens of intelligence bases in Başûr.

You mentioned that conspiracies are being hatched against the Kurdish people, and the Kurdistan Democratic Party (KDP) is lining up alongside the conspirators, what are the risks of this move for the Kurdish people in your opinion?

This alignment poses a great danger to the Kurdish people, and this is a historic mistake that the Democratic Party commits. We are aware that some figures within the party are not satisfied with what it is doing, and I hope that the wise people of the Kurdistan Democratic Party (KDP) can stop the party from supporting these plans.

We hope that the wise people in the Kurdistan Democratic Party will listen to the voice of the Kurdish people who appeal continuously to develop the language of dialogue, and to reject differences.

The wise people of the Kurdistan Democratic Party must realize well that the KDP's alignment with the conspirators puts the gains of the Kurds in Başûr, Rojava and Kurdistan in general at risk.

You noted the need to resolve differences in the language of dialogue, and for some time the Kurdistan National Congress has been seeking to create a platform for opening a dialogue between the KDP and the Kurdistan Freedom Movement, has held several meetings with forces and parties in Başûr, and corresponded with KDP several times, but it did not respond, how do you see these convergences?

Unfortunately, these convergences are negative, and according to my knowledge, the Kurdistan National Congress contacted with 3 parties within the Kurdistan Democratic Party, but they did not respond, and this is evidence of KDP insistence on continuing with its plans.

Now some cities of Başûr are witnessing uprisings against these policies that impoverished the people of Başûr, where they say we are hungry, we have not received our salaries.

These are absurd statements, and everyone knows that this is not the first time that the people of Başûr have revolted on the situation, several months ago, the people took to the streets and a number of protesters were killed.

Inevitably, the people will rise up if one party tries to put all the decisions and capabilities of Başûr into its own hands.

You talked about the existence of a great scheme being hatched against the people and you explained some of its details. In your opinion, what is required of the Kurdish forces, parties and people to thwart this scheme?

All Kurdish forces, intellectuals, writers, and national figures must unify their position and voice, and stand against any internal war, whatever its causes.

All Kurdish forces must realize that any gain achieved by the Kurds is a gain for all the Kurds, and not for any particular force or party. Protecting the achievements made in Rojava and the gains made in Başûr is the responsibility of all Kurds.

What I would like to say, as we stood in the face of Jabhet al-Nusra mercenaries and their followers in Serêkaniyê at the beginning, were able to defeat ISIS in Kobane, and were able to liberate our regions, establish a democratic project and advance it despite all the shortcomings, and just as we were able to shed global light on Rojava and steadfastly stood firm in the face of Turkish attacks, we will stand in the face of all plans aimed at torpedoing our achievements.