Shukri Sheikhani: The Turkish hand is permeated by chaos, riots, coup, destruction in any Arab country 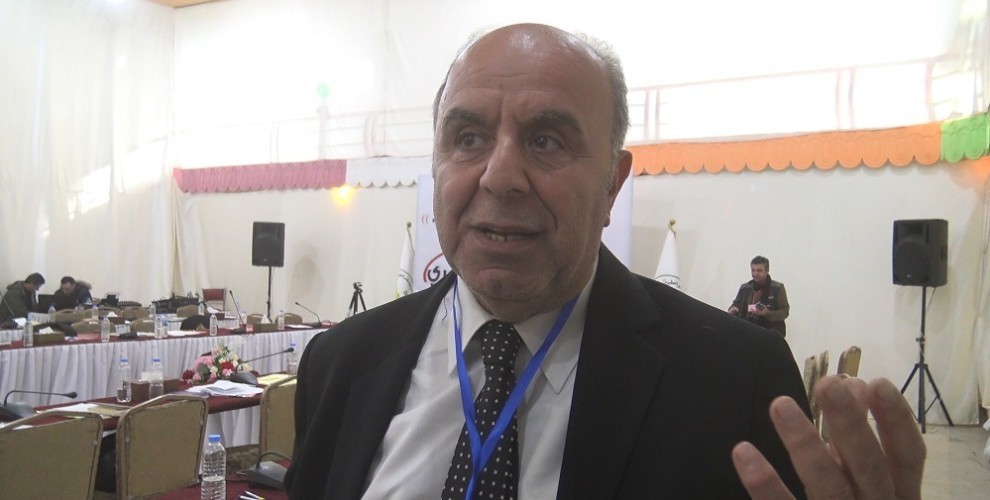 Shukri Sheikhani explained that the Turkish government is permeated in every chaos, riot coup and destruction in any Arab country, because it is the official sponsor of extremism and terrorism, noting that its hostility to the north and east of Syria which enjoys safety and security after liberation from Daesh mercenaries because it is incompatible with its plans and occupational efforts.

How do you assess the situation in northern and eastern Syria under Turkish threats?

For those who do not know the nature of life currently in the north and east of Syria, and the calm and honest daily work done in Autonomous Administration, for all those who think the contrary, I tell them that components in the north and east of Syria areas have been coexisting for years on this land, which is safe and stable indeed, not only words and false media as claimed by the Turkish occupier, as well as the areas of Afrin and Jarablus and others before being usurped by the brutal Turkish occupation.

It is not as if someone who has heard, but I saw this with my own eye and with a group of sisters and brothers, and to inform the whole world that the areas currently under Turkish occupation live in chaotic state because of the destruction of infrastructure, confusion and stumbling, and a clear lack of food, not to mention the psychological state of the population of these areas.

In the north and east of Syria, with the presence of all the components of Syrian society, they live a balanced and harmonious life, thanks to the charter of coexistence, which has been spiritually and morally agreed upon, and with the awareness and enlightenment of the vast majority of society, and peace and harmony between all and for all, but the Ottoman occupation only aspires to make chaos, devastation, and destruction the fate of these areas, and this confirms his hatred and historical grudge towards all the peoples of the region, including areas of northern and eastern Syria, which currently enjoys the finest days thanks to the Autonomous Administration programs.

Turkey interferes in the affairs of the Arab countries, especially Syria, how do you see these interventions, and in your opinion what is required of the Arab community to do in this regard?

This is a very important question, because the Turkish hand is really involved in all the chaos, riots, coup and destruction in any Arab country, especially since Turkey formally sponsors the political Islam formerly (Al-Qaeda and the Muslim Brotherhood) and the jihadist organizations that take Islam a cover, and it is tampering with Libya and Yemen by agreement with the Iranians, which, as I said, has messed with Syria's human and stone, and still protects Jabhet al-Nusra organization, Jaish al-Islam and the rest of the Free Syrian Army after Idlib and its suburbs.

Besides, Turkey tries in various ways and means to tamper with the security of Egypt, and try through the Palestinian Hamas organization and the Muslim Brotherhood via their sleeper cells in Egypt, and it is surprising that most of the Arab regimes still maintain relations of friendship and goodwill with them, and here I see the need to take important decisions at the highest levels to stand in the face of plans of bite any Arabic or Kurdish territories and back Syria by all means, financially, militarily and diplomatically in international forums, Syria is the first line of defense and the first and main gate in the face of Turkish occupiers to alarm and deal with all caution on this fateful issue for Arabs and the region in general.

In your opinion, what lies behind Turkish oscillating relations with America, NATO on the one hand, and Russia, Iran on the other?

Turkey is ready to play on all the ropes in order to destroy and annihilate the Kurdish component in Turkey and wherever it is found. Thus, the Turkish regime is a historical enemy not only for the Kurds but also for humanity and civilization, and therefore we see them sometimes with the United States provoking them by launching their hands in Idlib and northern Syria. The Turkish occupier does not abandon its historical ambitions in northern Syria and to complete the series of its bite and usurping, from Iskenderun to Ein Diwar for more than a year we have been hearing the tone of the Turkish threats.

The Turkish occupier is looking for a zone of influence extending from the north-east of Syria, specifically Tel Abyad in al-Raqqa to the north-western areas of Iraq, to ​​the Mosul area, with the aim of possessing a strong reaction to the future of Syria and Iraq at the negotiating table to persuade the Russian side to achieve its ambitions, where the latter pressured on Russia, thus pressuring on the Syrian regime to stop any dialogue between it and the Syrian Democratic Council.

All the peoples of the region were subjected to massacres by the Ottomans and Turks: whether Kurds, Arabs, Armenians, or Syriacs. Will the Syrian people be satisfied with the occupation of Turkey for new lands in Syria?

No matter time and days went by, the peoples who experienced the horrors of torture and persecution at the hands of the Ottomans, these peoples did not and will not forget, starting with the Armenians, Syriacs, Kurds and Arabs. The Ottomans were and still continue to commit the most heinous crimes, massacres and violations of human rights. Between 1914 and 1923, the Armenians and the Syrians were forced to walk for hundreds of miles to the desert and the borders of Syria without food or water until the number of victims reached one and a half million Armenians and Syriacs.

Days later, April 24 marks the anniversary of the Armenian and Syriac massacres, as well as the Kurds since the time of Ataturk and the 1926 Convention and so far the Turkish occupier committed the worst types of crimes against the Kurdish component and devotes more hostility to the beginning of 1973 under the name of revolution in Kurdistan which aimed at preserving the wasted rights of the Kurds by the random Turkish intransigence.

As for Arabs, they have also suffered a great deal, the Arabs and their religious sects have lived in pitch darkness and illiteracy for 400 years starting from Najd massacre 1818, the massacre of Baghdad in 1831, the massacres against the Shiites of Iraq in 1842 and 1843, and then the massacre of Badrakhan in the Hakkari region, which claimed the lives of 10,000 people, and then the massacres of Lebanon from 1841 to 1860 in the areas of Hasbaya, Chouf and Metn, which claimed the lives of more than 82 thousand Lebanese people, due to the policy of the Ottoman occupier in inciting the community on religious and sectarian grounds, thousands in Syria and Lebanon fell victims, and the genocide against Mowajda clan in al-Kirk one of the Jordanian towns where they were killed in the worst way contrary to any religion or doctrine, and finally the persecution and displacement of the people of Medina Sefer Barlek 1917 except for famine and chronic diseases caused by the Ottoman administration in various countries that have occupied.

In Syria, there is a regime that governs the country, opposition affiliated to foreign affairs and internal opposition. What are the positions of these parties of the Turkish objectives of occupying northern and eastern Syria under the pretext of the area that it calls safe?

Of course, this is not a generalization, but I believe that the majority of these three parties do not see or do not want to see, especially the external opposition, which is based in Turkey, not only this, but sees it as planner, savior of Syrian people and protector, even financer according to their narrow vision of things so I say that the public interest of the regime and the opposition is all centered on the throne of power, and they all forget that the Turkish occupier has been lurking in Syrian territory for 100 years ago and still, it is certain that the Turks are the main reason for transforming Syria from paradise to hell, destruction and displacement, and the displacement of half the population and the loss of life in three quarters of the Syrian territories.

Despite all this, the regime is ready to put its hand in the hands of the Turkish occupier and not to agree or sit with the people of the homeland of the Kurds and Syriacs, Armenians, Assyrians and Chaldeans, nor to listen to simple demands of these Syrian components of the same homeland, and I here and through your agency call the Syrian regime to dialogue with the Syrian Democratic Council through a Syrian-Syrian dialogue and listen to the language of reason, discussion and dialogue with the basic components active in the Syrian society, which had the credit and the upper hand to eliminate Daesh and rid the world of these criminal gangs from the homeland and the citizen.

- Nuclear experts: the destruction of three quarters of the centrifuge assembly hall in Natanz