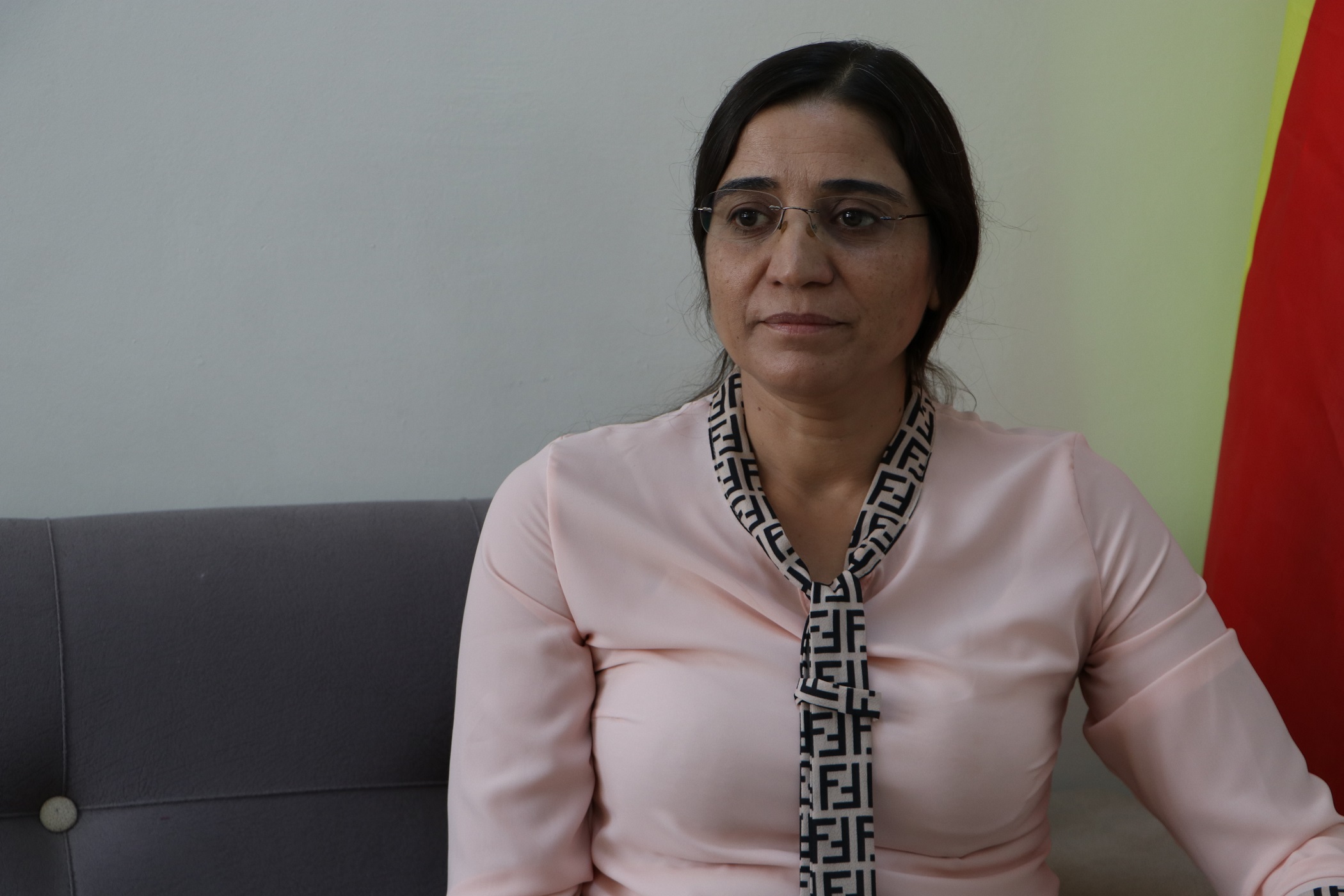 Zelal Cîger has explained that AKP aims to eradicate the Kurdish people, so it launched arrests campaign in Bakur Kurdistan under the title (I will destroy the victory that was achieved in Kobani), demanding form Democratic Party to explain the reasons for digging trenches along the border strip between Rojava and Başur Kurdistan, from Semalka to Şengal.

Turkish authorities are launching a political extermination campaign against HDP MPs, politicians, activists and women's organizations, which has been called the "Kobani" campaign, and the co-chair of the Democratic Society Movement TEV-DEM, Zelal Cîger, explained in a dialogue that: "This campaign aims to revive ISIS mercenaries again, just as Turkey It is trying to implement the scheme that it failed to implement in Rojava in Bakur Kurdistan.

• The Turkish authorities launched a campaign of arrests against Kurdish politicians and activists in Bakur Kurdistan. In your opinion, what is the purpose of this campaign?

What is striking now, is the AKP’s arrest campaign against the activists and politicians who organized demonstrations and marches in Bakur Kurdistan in support of the Kobani resistance. They did not carry weapons to fight ISIS, but they went out in demonstrations and marches and came to the borders to support the Kobani resistance, and to form human shields to prevent the entry of ISIS mercenaries from Turkish lands to Kobani.

The Turkish state is now carrying out a campaign of arrests against those who stood in the way of ISIS mercenaries, and everyone knows that standing up to ISIS mercenaries means protecting the values of all humanity, and the people of Bakur Kurdistan stood in the face of ISIS.

Turkey aims, through this campaign, to revive ISIS mercenaries again, and Turkey is also trying now to implement the scheme, which it failed to implement in Rojava in Bakur Kurdistan.

• Turkey named its recent campaign against politicians in Bakur Kurdistan as the "Kobani campaign". In your opinion, what message does Turkey want to send to the people of Rojava and the Kurdish people?

The Kurdish people and the peoples of the region achieved a great victory in Kobani; Turkey’s launching of a campaign of arrests against politicians under the name “Kobani Campaign” is a message that says (you achieved victory in the name of Kobani, and I will seek to strike and destroy this victory under this name), in addition to breaking the community's will, spreading fear and panic among the Kurdish people.

• You as a societal movement, what is required of you and the people of Rojava now regarding Turkish policies?

Significant reactions have appeared during the past period towards Turkish policies, and we, as the TEV-DEM that represents civil society institutions, make it clear that we are against the policies that the Turkish state follows against our people, and we continue our struggle and we must increase its pace, because the Turkish state is carrying out a campaign of extermination against our people at all levels. Political, cultural and social, not only in Rojava, but also in Bakur and Başur Kurdistan.

• All the parties that take over the reins of government in Turkey are targeting the Kurdish people in most parts of Kurdistan, and you have now mentioned that the goal is to liquidate the Kurds. What is required of the Kurdish forces and parties now?

The Kurdish people must unite their ranks and take national unity as the basis for their struggle, in order to be able to protect our rights, and we must evaluate the AKP's attacks against the HDP as attacks on Rojava, and the attacks it launches on Rojava are attacks on Başûr Kurdistan, and the attacks on Başur are attacks on Rojhalat Kurdistan. Because the Justice and Development Party does not differentiate between the people of Başur, Rojava and Bakur, its only concern is to eliminate the Kurds wherever they are.

Turkish state launched several campaigns against the Kurdish people; Its campaigns in Rojava failed, and now its campaign against the People's Defense Forces HPG in Başûr Kurdistan has failed in Haftanin, and as a result of its failure, it is now campaigning against the politicians, the people and the Democratic Peoples' Party, which represents the Kurdish and democratic people in Turkey. Our people in Bakur Kurdistan must be sure that thousands of Kurdish people in all parts of Kurdistan and the world support and support them, and we are sure that the people of Bakur will not take a step back and continue their struggle.

• You emphasized that the only solution to stand in the way of the genocide policy practiced by the Turkish state against the Kurdish people is to take national unity as the basis for the struggle, and on the other hand we see that the Kurdistan Democratic Party is digging trenches between Rojava and Başûr Kurdistan, to what extent do these acts serve national unity?

These actions create questions for us, while the Turkish state is practicing a policy of extermination against the Kurdish people in Bakur Kurdistan, Başûr Kurdistan and Rojava, and it occupies Kurdish areas and targets everyone who approaches the borders, the Kurdistan Democratic Party is digging trenches on the border strip and bringing in the Peshmerga forces.

The Democratic Party should explain the reasons for digging trenches along the border strip between Rojava and Başûr Kurdistan, from Semalka to Şengal.

We wonder, does the Kurdistan Democratic Party wish to cooperate with the Turkish state to launch an attack on Rojava? Or tightening the economic and political blockade on Rojava? Or is it against Kurdish unity? The Democratic Party must answer these questions, because these actions do not serve the cause and Kurdish national unity, and are tantamount to a coup against national unity.

The people, parties and forces of Başûr Kurdistan are now required to stand up to the actions of the Kurdistan Democratic Party.

• What is the message that you want to send to the Kurdish people?